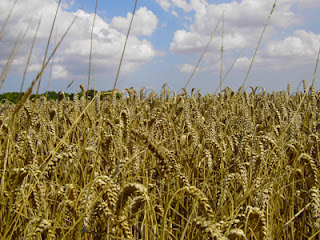 No, not the US forces in Baghdad but the world price of wheat, which is also undergoing a surge. According to Reuters, the world markets, already at their highest for more than a decade after bad weather hit crops, show no sign of retreat and are feeding fear of food price inflation.

Since April, there has been price hike of some 75 percent on both sides of the Atlantic after a dry northern hemisphere spring turned into a wet early summer, reducing harvest expectations. To add to the general woes, southern hemisphere crops are suffering from a bout of dryness.

This is happening at a time when world stockpiles are at their lowest for 25 years and the International Grain Council has cut its estimate for 2007/08 world wheat output by seven million tons to 607 million, the EU crop estimate also falling to 114.1 million tons from 118.9 million a month ago. On the other hand, demand is at its highest, driven partly by the growing market for biofuels.

Yet, come the autumn, the Commission is still expecting produce its proposals for a 20 percent renewable energy quota, which is expected to include a commitment to a ten percent EU-wide biofuels quota.

All of a sudden, reality is neck-and-neck with fantasy, so it is going to be fascinating to see which crosses the finishing line first. On past form, the betting should be on fantasy, which means we could be in very serious trouble, faster than we think.