Georgia does have some friends 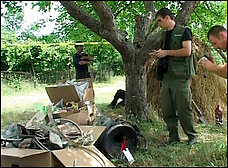 Vladimir Socor catches up in the Eurasia Daily Monitor on developments after the August 6 Russian missile drop in Georgia (denied by Russia and described as a dramatic episode by First Deputy Prime Minister, Sergei Ivanov).

In the meantime, perhaps understandably in view of their own history, the Baltic states have all expressed their support for Georgia and have appealed both to the EU and to NATO to take a strong line on what they see as deliberate destabilization of the country.

Lithuania has initiated a meeting of the New Friends of Georgia group of countries, to be held on September 13 in Vilnius. Created in 2004 by the Ministries of Foreign Affairs of the three Baltic states, Romania, Bulgaria, and Ukraine, the group has met on an annual basis since then and is open to new member countries. For example, Azerbaijan -- whether it decides to attend the Vilnius meeting or not -- has proven to be a crucial friend of Georgia in the region, sharing economic burdens and political risks with Georgia.

In the New Friends’ group, Romania has also expressed support for Georgia following the Russian air incursion. Minister of Foreign Affairs Adrian Cioroianu confirmed to Bezhuashvili by telephone that Bucharest would join in raising the issue within the EU and NATO. Poland’s Ministry of Foreign Affairs has taken a similar stand, and President Lech Kaczynski announced his support for Saakashvili’s position (DPA, Radio Polonia, August 9).

The three Baltic states and Poland are joining the United States and several West European countries in an international group of military experts to investigate the August 6 Russian missile drop on Georgia. Airspace control specialists from the Baltic states’ defense ministries have already arrived in Georgia as part of this group.

Meanwhile, Georgia has proposed the formation of an international group of experts who would investigate the matter. This group will have to be independent from the existing transnational organizations, which are either subject to Russian veto, like the UN or the OSCE or finds it difficult to come to any conclusion as to how to deal with that country, like the EU.

On the whole, as Mr Socor sums up, the organizations acted exactly in character:

On August 9-10, the UN Security Council turned down Georgia’s request for a UNSC session to discuss the missile drop. The Security Council’s incumbent presidency, which happens to be Congo, opined on behalf of some other countries as well that a discussion would be premature and should, in any case, await the results of an investigation by the OSCE. Barely one month earlier, the UN had exculpated Russia over the March air raid on Georgia, because the UNOMIG-led investigative team operated on the rule of consensus with Russia. Thus, Georgia received conclusive confirmation twice in the space of several weeks that relying on the UN for national security is not only pointless, but a downright counterproductive substitute for real measures.

For its part, the OSCE’s incumbent Spanish chairmanship merely urged Russia and Georgia in a public statement to show restraint and cooperate with one another in clarifying what had happened. Such evasion of responsibility has become almost a norm in recent years from OSCE chairmanships facing Russian pressures for budgetary and organizational “reforms.” In a follow-up statement, the chairman -- Spanish Minister of Foreign Affairs Miguel Angel Moratinos -- called for an investigation and announced the OSCE’s intention to cooperate with it. Thus, the OSCE, in effect, passed the ball to others -- the best possible move for the organization, given its own internal dilemmas.

For its part, the Portuguese presidency called on both Russia and Georgia not to escalate the crisis, which, presumably just kind of happened, and also called for a “rapid, thorough, independent investigation” by person or persons unknown.

So far as one can tell, the High Representative, Javier Solana has said nothing on the subject and has not even indulged in his favourite hand-wringing activity.