It would not be the first time that we have observed that, in addition to the armed conflicts in Iraq and Afghanistan, we are fighting two other wars – an economic war and a propaganda war. Given a political will to fight the shooting wars, there is no reason why we should not prevail in either theatre, given also that we have the staying power (not that we have).

But both those preconditions – political will and staying power – depend intrinsically on the maintenance of public support (or, at the very least, grudging acquiescence) and the willingness to continue financing it. In the way of things – which are always complex - the latter is dependent on the former while the latter, to extent determines the former. To that extent they are interdependent, although – in the face of total opposition to a war – the financial question becomes irrelevant.

In terms of losing the wars in Iraq and Afghanistan, if our enemies has no hope of winning on the field of battle, they can most certainly prevail in the propaganda war, eroding our will to continue, to the point that our own government is forced to withdraw its forces from the conflict.

In this type of counter-insurgency battle, therefore, the decisive battlefield is in the hearts and minds of the home population and - to a probably equal extent – in the hearts and minds of our enemies and the populations from which they are drawn or with which they share space. As one of my friends wrote to me in an e-mail, this is not a battle for space in a territorial sense, but a battle for the space between the ears of our friends, allies and enemies.

It is in that context that the move, reported today, by the MoD to close down the ability of our Service personnel to communicate with the wider world – so ably described by my co-editor - is an absolute disaster. 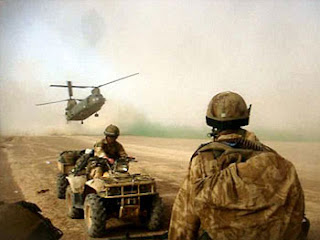 For sure, it is as Mick Smith describes in his blog a reaction to the Iran hostages fiasco, and a particularly inept move, but the MoD's concern goes much wider. One thing that got them truly spooked was the use by front-line troops in Afghanistan of helmet cams, filming action as it happened and later posting the raw sequences on sites such as U-tube.

But the real disaster is in that this "new" ban – which is actually a re-affirmation of a standing prohibition, brought up to date to encompass new media – vividly demonstrates that the MoD has learned absolutely nothing about fighting the propaganda war and reverted to the old paradigm of banning everything and anything unless it can control it.

In terms specifically of the helmet cam material which came out of Afghanistan, breach of regulations it most certainly was. Raw and rough it also was, but it was a propaganda coup for the Army, conveying a riveting immediacy and tension to which no professional film maker could ever aspire. It did nothing but good for the Army, in portraying "our boys" in the field in a very human light.

If there were any officials in the MoD who had that rare combination of both authority and brains, instead of revisiting existing prohibitions, they would be working on how to facilitate the widest possible publication of such material, making it as accessible as possible, as quickly as possible, in a bid to counter the torrent of material churned out by the jihadist.

Even to this day, the MoD does not seem to have woken up to the extent that the forces of evil are employing that great bastion of democracy, the internet. Everything from straight propaganda and training material, to command and control instructions, finds its way onto the web, with a speed that outstrips anything the cumbersome government bureaucracy could dream of achieving.

Freed from the constraints of a formal hierarchy, the terrorists can act as individuals, making their own judgements as to what to distribute how to do it. the only people who can match that speed and flexibility are other individuals, acting as individuals.

In that sense, our soldiers are not only fighters in the conventional sense, they are also in the front line of the propaganda war, a position made possible by the communications technology revolution. And, in telling their stories via the new media, they are simply doing what they do naturally, talking to their friends and relatives, only with a greater reach. 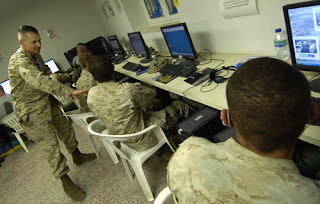 Rather than seeking to clamp down on this activity, therefore, the MoD should be encouraging it. They train soldiers to fight the shooting war, and then rely on their initiative and discretion to fight effectively – and humanely – obeying the rules of war. In the same way, they could be trained to fight the propaganda war, and to obey the rules, then leaving it to their initiative and discretion to use their training to effect. They should then make sure soldiers have the equipment and the wherewithal to do their jobs.

How bizarre it is that the Army is prepared to give teenage soldiers machine guns and permission to kill people with them, yet are not prepared to allow them near an internet terminal to tell their stories.

The reality though is that the MoD is less concerned about winning the propaganda war than it is about controlling the message. As I remarked on the ARRSE forum, government security is not about protecting the people, it is about the government protecting itself from the people. Or, as another commentator put it:

Quite right too. Some sand-blasted, exhausted, 20 yr old squaddie in Helmand province complaining on ARSSE about running out of ammo while RPGs whizzed by his ears is a far greater threat to national security than "200 terror networks stretching from the UK to Pakistan, including 30 'Priority 1" plots". Get your priorities right. Are you some sort of Communist?

The man is right. When it comes to priorities, control is far more important than security, or winning this country's wars.