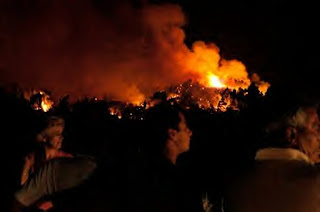 Fires have devastated Greece this summer. Actually, forest fires seem to happen in that country most summers but this one has been particularly bad.

We know that the southern part of Europe has had very high temperatures that spread briefly to Central Europe as well, while we in the northern part have suffered from a cold and wet summer. (Though in London the Bank Holiday week-end seems to be set to be warm.)

There have been complaints of inefficiency in the fire service and government decisions not to use helicopters for the fire-fighting as they were afraid that water from above might cause yet more power cuts. Greece seems to have had quite a few of these in the last few months.

One rather wonders what all the money the EU is supposed to be spending on that country's infrastructure goes on. It can't all be paid out to tobacco farmers, surely.

Now we have news that people are being arrested for causing the fires deliberately. Rather a random group has been picked up so far and it will be interesting to see whether all of it or, even, any of it was deliberate arson or simply thoughtlessness.

Meanwhile, Greece has declared a state of national emergency. And, as we have reported before, there is an election due in that country. Will that be postponed, one wonders.

Email ThisBlogThis!Share to TwitterShare to FacebookShare to Pinterest
Labels: Greece