Then again, some things have changed 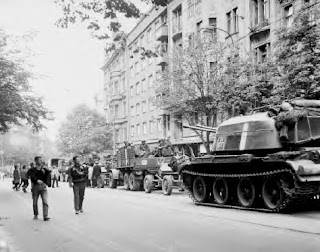 Yesterday was the anniversary of the Soviet invasion of Czechoslovakia, of those tanks rolling into Prague to put down the so-called Prague Spring (though the ideas were generated in the Slovak part of the country). This showed that the Soviet leadership was more astute than the well-meaning leaders of Czechoslovakia or their supporters in the West.

"Communism with a human face" is an oxymoron. Therefore, it was obvious to anyone who thought about it all clearly (and, I am sure, the Soviet leadership did) that it would eventually develop into non-Communism if not nipped in the bud.

While we are on the subject, let me, as an aside, explain a certain difference between what the Soviets did in Hungary in 1956 and Czechoslovakia in 1968. For certain reasons the Soviet troops had moved out of Czechoslovakia in the years after the Second World War. So the 1968 invasion was exactly that. They had never moved out of Hungary. In October 1956 they left Budapest while fighting went on in other parts of the country. In November, heavily reinforced they moved back into the capital. But that is all by the by.

What is of interest is a Reuters report of how the Russians have chosen to mark the anniversary - by threats and bluster yet again.

Russia's military chief told the Czech Republic it would be making a "big mistake" to host a U.S. missile defense shield on its soil and urged Prague on Tuesday to delay a decision until a new U.S. president is elected. ...

"We say it will be a big mistake by the Czech government to put this radar site on Czech territory," said Yuri Baluyevsky, the Russian military chief of staff, after meeting the Czech deputy defense minister, Martin Bartak.

He said the Czech Republic should hold off making a decision until after the U.S. presidential election, scheduled to take place in late 2008.

As Douglas Hanson of American Thinker points out, there really is very little the Russians can do militarily at the moment (though I have a sneaking suspicion that rolling tanks across the European plain might be a lot easier than fighting Chechnyans in the mountains).

Clearly, the Russians are hoping that the Democrats will come to their rescue. Firstly, by getting elected and, secondly, by postponing sine die the plan for the missile shield. They might be calculating right or they might turn out to be wrong on one or both those counts.