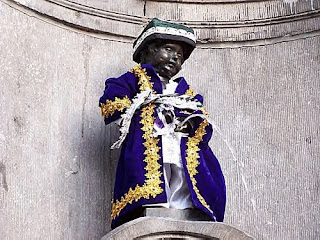 According to Filip van Laenen on Brussels Journal, this one is an existential crisis and may well end up with Belgium falling apart. The King, he proclaims angrily, ought to be at his post and not having a holiday in the South of France, reluctantly coming back to accept the Prime Minister designate’s resignation.

Well, I am not a Belgian and the nuances of that country’s politics proabably escape me. But for the life of me I cannot see what difference it would make if King Albert II stayed “in the capital making sure he's available every single hour of the day in case the negotiator needs assistance”. Are there no telephones, mobiles or computers in the South of France?

The problem seems to be, as ever, that the two parts of Belgium, the French and the Flemish, cannot agree on division of power. To be quite precise, Flanders wants more regional power and that, indeed, can lead to the break-up of this rather curious country.

Mr Leterme, a Flemish politician, had been trying to form a government since mid July after the Christian Democrats and Liberals gained the most votes in the 10 June elections.

However, Flemish demands for more regional powers in areas such as justice and ransport fuelled fears among French-speaking politicians that Mr Leterme was interested in breaking up the country.

Past comments by Mr Leterme that Belgium is an "accident of history" and that the only things Belgians have in common are "the King, the football team, some beers" lent to this fear.For their part, Dutch speakers are keen to preserve their sense of identity and have been wary of francophone Belgians moving to the Flemish surroundings of Brussels, asking for local community rights.

The International Herald Tribune sums up the problems:

French-speaking politicians fear Flemish demands for greater regional control in areas such as employment, transport and justice could undermine Belgium as a federal state. They have made counter-demands for more rights for the Francophone minority living in Flemish areas. …

Central to the dispute in the government talks are the rights granted to the substantial French-speaking minority living in districts around Brussels which are officially in Dutch-speaking territory.

Flemish politicians want to break up a bilingual voting district to stop French-speaking parties running for elections in Flemish suburbs around the capital.

The Francophones say they will agree only if they get a strengthening of their language rights in more Flemish suburbs — such as being able to use French in dealings with their town halls. That is rejected by the Flemish.

Talks have been going on for five weeks and have now officially collapsed. Whether another potential government is being lined up in the background remains to be seen.

In the meantime, another Flemish separatist demonstration is being planned for this week-end, a moderately large one having taken place last week-end. Polls are being conducted on whether Flanders should claim independence or try to unite with the Netherlands.

All in all, another fine mess as the IGC gets going.