What is the point of this? 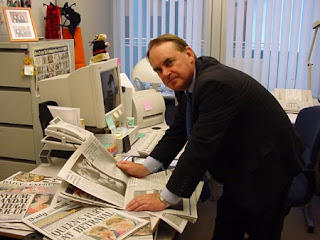 Featured in The Telegraph today (but nowhere else) is the publication of a "simplified treaty" by Timothy Kirkhope, the Conservative leader in the EU parliament.

It is presented as an alternative to the current constitutional reform treaty, offering all kinds of goodies, including "calls for limits on the powers of the European Court of Justice", and also making it clear "that national parliaments should be the primary law-making bodies."

Kirkhope is cited by The Telegraph as saying that it was crucial for opponents of the constitution to offer an alternative to it, and believes that, "It's crucial that the EU re-engages the people of Europe and focuses on the big issues like global warming, poverty and globalisation."

These sentiments are backed by William Hague – who writes the foreword to the document – who writes that it is vital that EU leaders find an "alternative vision to the outdated goal of ever closer union".

Hague's view is that a treaty that handed powers back to member states and made the EU more accountable and democratic would offer "a tremendous opportunity to tackle some of the real problems the EU currently faces".

The trouble is that, although presented as something new, this is simply a rehash of something which Kirkhope produced in 2005 and is about as relevant now as it was then. The "colleagues" have their own draft treaty on the table and they really are not interested in anything that Mr Kirkhope – or Master William – have to say.

The document, therefore, simply represents a strand of wishful thinking that dominated the upper echelons of the Conservative Party. They are imbued with the idea that the "colleagues" are somehow "misguided" in their pursuit of political integration, and simply do not know any better.

From their fantasy island, the Conservatives thus delude themselves that all they need to do is offer an alternative "vision", whence the "colleagues" will fall back in wonderment, admit their errors and embrace the new vision to their collective bosoms.

As such, the document also represents the continued refusal of the Conservatives to face the reality of the integration process (of which they have been part) – their refusal to accept that each treaty it is part of a continuum, all directed to the end point of political unity.

Their problem is that they cannot acknowledge this, as it means recognising and admitting to their own role in the process. Therefore, it is much easier to trot out alternative "visions", even though they know that they have not the faintest chance of being adopted.

However, the merit of this approach – from the Conservative perspective – is that it gives the impression of activity and thus diverts attention from the fact that the Party is failing to engage with what is. As long as this pretence can be maintained, it staves off the day when they have to get to grips with the reform treaty and tell the nation precisely why it should be opposed.