The "pros" have it 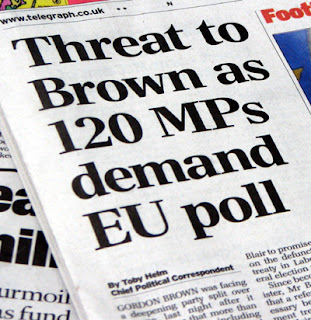 Quick off the mark, the Telegraph has on its website the contemptuous arrogance of David Miliband, our Europhile foreign secretary, under the headline, "Government defies rebels on EU referendum".

He is holding the line that there will be "no referendum", even despite "revelations in the Daily Telegraph that 120 Labour MPs now want a public vote."

The rebuff – entirely predictable, of course – came on this morning’s Today programme, with Miliband still lamely claiming that the new treaty was different in "absolute essence" from the defunct EU constitution. On that basis, the government was not obliged to follow through on its manifesto pledge to hold a referendum.

"We have not got a European constitution," said Miliband. "Twenty-seven European heads of government all signed a document in June, after nearly two years of negotiation, saying the constitutional concept has been abandoned."

He added: "I think that as Parliament gets to grips with the reform treaty that comes out, as they look line by line, they will see first that it is good for Britain, second that it is very different from the constitution in absolute essence, and third that the red lines, the key national interests in foreign policy and other areas of the UK have been protected."

In the print edition, the Telegraph follows through with a strong leader, noting that "Gordon Brown's fabled strengths as a political strategist are about to be tested to breaking point," following the revelation "that as many as 120 backbench Labour MPs (apparently with the tacit support of some ministers) support the call for a referendum on the EU reform treaty". It presents the prime minister, says the paper, "with a serious challenge to his authority. A rebellion on that scale would mean that he could not carry the House of Commons."

We do hope the paper is right but, even if it is flying a kite, if it keeps "banging on", the wish could become the reality. 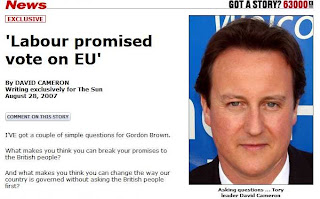 And, "banging on" is precisely what David Cameron is doing in The Sun, with an authored piece headed: "Labour promised vote on EU". "What makes you think you can break your promises to the British people?" he asks, adding, "And what makes you think you can change the way our country is governed without asking the British people first?" The simple answer to both questions says Cameron is, "Arrogance".

If the Boy keeps on in this vein, there is a serious danger that his Party might get elected to government. Brown cannot afford to ignore this style of attack.

The Daily Mail also pitches in, with a story following in the wake of The Telegraph, headed, "Brown under pressure as more than 100 Labour MPs back EU referendum", and also follows through with a leader bearing the simple message: Let Britain decide.

Compared with the fatuous intervention from The Financial Times and the silence of the left-wing media, on this day it is fair to say that the pro-referendum campaign has it.