Update on the EU and Gaza 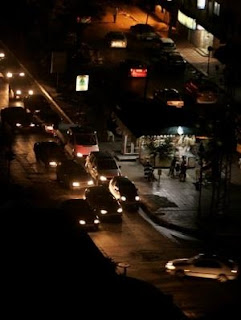 Al-Jazeera reports that the EU has agreed to pay for the fuel supplies to the Gaza power plant and these have now been resumed, ending the big power cuts of this week-end. The EU's decision was apparently influenced by assurances given by the Hamas leader, Ismail Haniyeh, that his organization will not skim any money off the electricity revenues for its own purposes.

The EU intends to carry out an audit (that should be entertaining) in conjunction with the Palestinian Authority rather than Hamas, which may cause ructions between the fraternal Palestinian organizations.

So now we know - nobody is too corrupt for the EU.

However, the story, as we have mentioned before, has revealed a certain amount about everyday life in Gaza, a territory that has no real income to speak of, apart from endless aid:

At least half of Gaza's 1.4 million residents were left without lights, fans and air conditioning for five days as temperatures soared to 34 degrees.

Israeli and Egyptian companies that power the rest of the strip provided some added electricity.

But for the most part, the affected areas were blacked out for 20 hours a day, forcing shops to run on generators and families to go to shops every few hours because they could not refrigerate food.

We are, of course, delighted to learn that the people of Gaza do not live in the abject poverty we have been told they live in. But, as one of our readers has pointed out, you do not get traffic jams in Darfur (except for large vehicles that carry UN personnel. Neither do they have problems with their air conditioning.