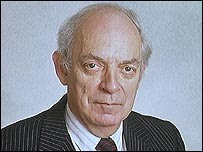 Lord Biffen of Tanat, the former Conservative Cabinet minister, died today in hospital. He was 76. As John Biffen, the former MP for Shropshire North was leader of the House of Commons for five years during Margaret Thatcher's premiership.

His successor in Parliament, Owen Paterson, offers the following tribute:

John Biffen was an exceptional man. He was MP for North Shropshire for thirty five years and people of all parties and all interests owe him a great debt. He was greatly admired as a constituency MP for his conscientious hard work, his judgement and his kindness to all, regardless of their political affiliation.

On the national stage, he was first and foremost a great Parliamentarian, still remembered as one of the finest Leaders of the House of the last fifty years. Liked and respected by both friends and opponents, he handled the House with fairness and a deft sense of humour. He was a staunch believer in the sovereignty of the House of Commons.

He played a key role in the revival of the Conservative Party’s fortunes in the 1970s as a member of Margaret Thatcher's inner circle, rethinking and developing the policies that led to eighteen years of Conservative Government and the transformation of Great Britain.

However, to the end he was brave and independent-minded, never afraid to part company with the party line if he believed it to be wrong.

My thoughts go out to his wife Sarah and his stepchildren Lucy and Nicholas. She has always been a tower of strength and in particular, has looked after him with unfailing care in recent years as his health declined.

Labelled by political commentator Brian Walden as the "most honest" politician he had ever interviewed, Biffen famously said of Thatcher, "she was a tigress surrounded by hamsters."