Another day, another rant 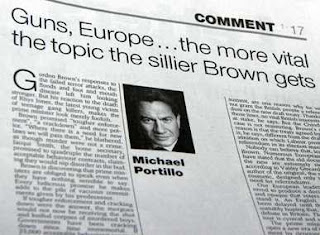 Trawling through the Sunday newspapers, as one does, I was particularly struck by the title of Portaloo's (as he is known in Private Eye) piece in The Sunday Times

Headed, "Guns, Europe... the more vital the topic the sillier Brown gets" it seemed at least worth a look, to see what the great sage had to say on the subject which is ostensibly our raison d’être.

Whatever interest one might have had in his words, however, came screeching to a halt on confronting this paragraph:

Our European leaders have connived to produce a document so long and opaque that voters cannot understand it. An English translation has been delayed until the autumn, presumably hoping that, too, will frustrate debate in Britain. The leaders' behaviour is cynical and even tyrannical.

For goodness sake! Even The Sun picked up the fact that the treaty was available in English on 1 August. Thus, far from its lack frustrating debate, there has been a healthy debate going on ever since.

This is so typical of what my colleague Booker calls the "above the line" figures, who waft effortlessly through life, with minimal knowledge and understanding. They exhibit a laziness born of arrogance which exempts them from the normal duty of mere mortals, of actually finding out what is going on before opening their mouths. Yet they still expect to be taken seriously - and so often, they are.

But what claim has Portaloo to be taken seriously on the EU issues, when he does not even know that the draft treaty has been available in English for nearly a month? Not least, this says that he most certainly has not read it – much less even begun to understand what is in it.

Taking on one of the other issues he raises – the subject of gun crime – he like so many commentators in this weekend's media, pontificates about Rhys Jones, the Liverpool boy murdered by another youth armed with a gun. And, like his fellow "above the line" creatures, Portaloo gets it wrong.

Actually, while the "great and the good" wring their hands and wail that something must be done about "youth gun crime" – also despairing that there are no "quick fixes" - the answer to the problem is remarkably simple. Give teenage boys guns, and let them use them.

The basis of this startlingly simple solution stems from a very straightforward premise, that any parent of a young male will know: boys like guns. Take away their toy guns and give them Barbie dolls and they will put sticks into their elegant little hands and turn their Barbies into soldiers.

As a young teenager, however, I was fortunate enough to go to a school which had a large and well equipped Combined Cadet Force. We even had our own armoury and a .22 rifle range on the campus. By the age of 13, I had been initiated into the art marksmanship and, by the age of 15 was happily firing Bren guns on the Army ranges on Rayleigh Marshes.

We even had our own three-ton Army truck and the boys would happily pile in the back, while some obliging teacher would ferry us the forty miles or so for an enjoyable day out, puncturing inoffensive targets with .303 calibre bullets. Not least, we fired the old No.4 Lee Enfield, which had a kick like a mule. Of course, the health and safety nannies would never allow that these days.

The point, as the gun campaigners were saying at the time of Dunblane, is that if you ban guns and demonise them, the only people who will have guns will be criminals. And if you take disenfranchised teenagers, who like all teenagers, live only to express their rebellion, the ultimate symbol of rebellion is the ownership of a firearm. 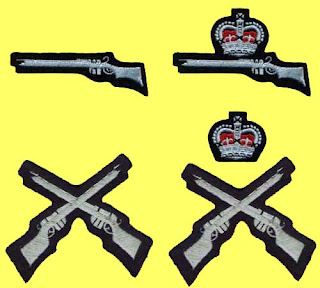 Within the framework of the cadets, however, we could not only enjoy guns, but we were taught how to use them responsibly. And as for status – how we all strived for the privilege of wearing that coveted crossed-rifle and Crown badge on our sleeves which told the whole world that we were a marksmen first class, having worked our way up through the different levels.

The issue also has wider implications. While we are fighting two wars and, on the one hand, have massive youth unemployment and a shortfall of recruitment to the Army, the cadet forces provide a powerful recruitment tool – which is what they were intended to do. And they worked. For many, including myself, the experience was huge fun (where else to you get to drive a three ton truck at the age of 16, and flash around an airfield driving Land Rovers to pick up gliders? How else could you stage mock battles, with real rifles, blanks, and thunderflashes?), motivating many boys to join the Services. Reactivation of school cadet forces would help enormously to improve recruitment.

Needless to say, this will not happen. The "great and the good" would prefer to wail and wring their hands, speaking from that profound state of ignorance that only the highly educated seem to be able to manage. And teenagers will continue to shoot each other, instead of the Queen's enemies.