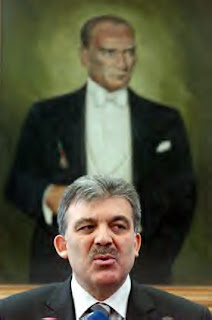 The AK Party, having won a decisive victory in the Turkish parliamentary election last month, has once again nominated Abdullah Gül as its candidate for the presidency.

Last time round this caused difficulties with the secularist parties and the army. The parliamentary parties refused to participate in the presidential vote, thus causing something of a crisis, which led to the parliamentary election. At present the secularist groups are merely muttering threats and Mr Gül is due to meet them to allay their fears, which revolve round his strongly Islamic outlook and his wife wearing a headscarf. (Actually, she seems to wear rather elegant Parisian headscarves so she may not want to give them up even to promote her husband's career.)

The first round of the presidential election is due on the 20th. In the first and second round a two-thirds majority is required. The AK Party does not have enough members of parliament to achieve that so the process may well go to the third round when a simple majority will be needed.
Posted by Helen at 00:05