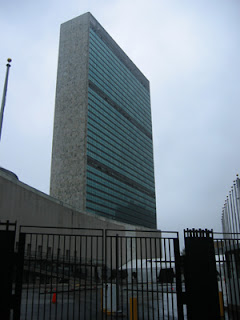 Tory MEP Syed Kamall has a letter in today's Telegraph on the vexed question of our seat on the United Nations Security Council.

He is responding to the non-story of Malloch-Brown's pronouncement that the UK should lose its seat. In so doing, he completely misses the point and thus fails to understand the real nature of the threat.

According to Kamall, the replacement of our seat on the UN Security Council with a single EU seat, "would seriously hamper our ability to form alliances with other non-EU nations or take unilateral action to defend British interests." We could, he adds, "even find ourselves engaging in a conflict opposed by our own Security Council representatives. Recent conflicts have shown that EU governments often have conflicting views on security issues."

But, as we pointed out when this issue arose in late July in respect of the EU's constitution reform treaty, this is not on the agenda. It will simply not happen in the foreseeable future.

The actual point is that, if this was the only change in the treaty, on all other matters the French and British would be able to continue to present their own positions at the Security Council.

And, as was the case in the run-up to the 2003 Iraqi war, the British position was very much at odds with that of France and other major players in the EU, with France actively undermining Britain's attempts to get UN support for the war.

But, if Kamall is wrong in detail he is right in substance. If the "reform" treaty goes ahead, we will find it much more difficult to maintain an independent position in the Security Council, but this has nothing to do with the seating arrangements.

The real threat is as set out in our previous piece, whereby support for the United Nations is built into the EU's objectives (another provision lifted directly from the EU constitution).

Add to that the ability of the Union – through the person of the High Representative – to make its own deals with the United Nations and that enables the EU to stitch up positions with the UN, restricting the UK's ability to act independently.

It is difficult to speculate as to precisely how this will work but, as we know from John Bolton, the Foreign and Commonwealth Office runs its own show in the UN. Officials, he said – especially during the Iraq crisis - worked to undermine Tony Blair's pro-American policies at the United Nations because they had been "infected" by French and German (i.e., EU) views.

The inclusion of the new provisions in the "reform" treaty allows for carefully crafted deals, hatched in the couloirs of Manhattan and Brussels which, over term, can be used to lock the UK further into the maw of multilateralism and restrict our freedom of action.

Nothing will be that obvious and nothing will be overt. But that is the way the "colleagues" and their tranzie friends in the UN work: deals within deals, the nature of which only become apparent when you try to do something they would rather you did not.

Now, this blog does not raise these issues lightly. The procedural wrangling over who has what seat in the Security Council is important, but it is the lesser of the threats.

Focusing on the chimera of our losing our seat in the Security Council diverts attention from the greater threat. And, in that there is actually no prospect in the immediate future of that happening, emphasis on that point actually plays into the hands of the government, which can so easily rebut claims that our seat is at risk.

At this stage, therefore, it is vital that we properly understand what is happening and what is proposed. The real threat is as stated here, and we ignore it at our peril.