The Chinese toy recall is given the treatment in The Sunday Times today, with tales of fraudulent safety certificates, checks not done and standards not met.

Yet, while reference is made in the Sunday Times story to "European Union regulations", you will find no mention of "CE marking", nor any examination whatever of the role of the EU in monitoring the enforcement of the standards. Neither will you find any critique of just how fragile the system really is.

Yet, as we pointed out in our earlier piece (and this one), the whole system is one devised by the EU and the Commission has played a significant part in the dismantling of national systems, and scaling down monitoring.

We also pointed our in our pieces that it is well known in the trade that the CE marking system is a charade. Not least, there has been widespread fraudulent use of the CE mark (the format of which is supposed to be standarised), with so many forgeries in circulation that even the Italian authorities were moved recently to issue to the trade examples of the most common forgeries (illustrated above). 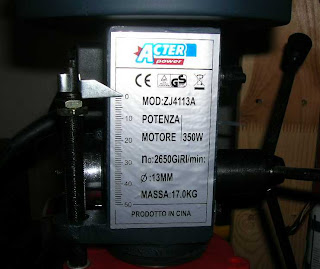 Yet the reader who brought this to our attention also told us that he did not have to go very far to find one of the forgeries. There was one in his own workshop. He photographed the equipment (a power tool) bearing the mark and sent it to us (right).

It is an interesting observation on the ways of the media that, given one of the "sillies" like the bent cucumber regulations, they all pile in but, when the EU fouls up big time, they are silent. No wonder – or so we are told - so many people are indifferent to the Eurosceptic cause: they cannot see the relevance of EU regulation to their everyday lives.

Yet here is a classic example of the failure of a core EU system which has direct relevance to peoples' lives. And no one is telling the wider public what has gone wrong - except, of course, Christopher Booker.