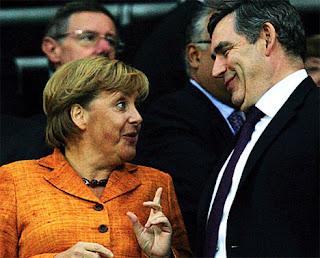 It was entirely predictable that Gordon Brown would reject the Unions' call for an EU referendum. And indeed he did, predicting with a casual insouciance that a trade union rebellion on the issue would not succeed.

This he did after a cosy love-in with chancellor Angela Merkel at No 10, followed by a happy little interlude as the pair rushed off to Wembley Stadium to watch the England v Germany football friendly.

But, if Brown is confident in his ability to railroad the treaty ratification through Parliament, a few storm clouds are gathering on the horizon that may just threaten to rain on his parade.

One of those clouds is a possible revolt by Labour MPs, flagged up – and not for the first time – by The Daily Telegraph. In today's edition, it is claiming that a "hard core" of at least 40 Labour MPs is poised to issue Gordon with an ultimatum to re-open talks on the treaty or concede a referendum.

We are told that they are preparing a 15-point plan to put to the prime minister, calling for the constitutional reform treaty to be radically amended, specifically to avoid the need for calling a British referendum.

Of those, the most interesting is Gwyneth Dunwoody, a long-serving senior backbencher who holds considerable sway in the Labour Party. She has broken cover and called directly for a referendum.

She is reported by The Independent as saying that, "I think Gordon will understand there are very grave doubts whether we have the machinery right to defend our interests," adding: "It's no use saying that we have exemptions if other people are saying they are going to set up institutions under which there will be a qualified vote."

By The Daily Mail she was cited as saying, that she wanted Brown to hold a referendum "because of the magnitude of the changes" to Britain that are in the treaty. Articulating a sentiment with which few (of our readers) would disagree, she went on to say, "I'm afraid that instinct tells me as a politician that every time you allow people to chip away at your basic legislation, you give something that you're probably going to regret."

The leader of the putative Labour revolt, however, is Ian Davidson, MP for Glasgow South West. Apparently, he might demand the removal of the proposal to create a new EU "foreign minister" – although we hope he expresses this with more clarity. In the current treaties, that post already exists. That is objectionable enough but the issue on the table is the increase in his powers

It is also thought, according to The Telegraph that Davidson might also call on Brown to use a revised treaty to amend the 2004 EU directive on freedom of movement, the directive which the paper archly states, "is now being blamed for preventing the UK from deporting Learco Chindamo … back to his native Italy."

That again is an odd one, as a treaty is not the usual mechanism for dealing with amending legislation – although it is possible that a robust threat to veto the treaty could extract some concessions.

Needless to say, Brown's sockpuppet, Jim Murphy, aka Europe Minister, is having none of this. He has accused the rebellious MPs of EU "navel-gazing" and is denying that the treaty threatens "sweeping new powers" over Britain.

What is perhaps most significant about all this though is that, contrary to my expectations, the issue is still live and attracting media attention, well into the "silly season". That would seem to suggest that, as the political season gathers momentum in the autumn, the EU could become a mainstream political controversy.