The demo that will not happen

This story has not been covered, so far as I can tell, by the MSM but has cropped up on the blogosphere. In particular it had several airings on Gates of Vienna, a blog written (mostly) by two people, who call themselves Baron Bodissey and Dymphna. So far as I can tell, neither lives anywhere near Vienna. Not the one in Austria, that is, but there might be a Vienna with gates in Virginia.

The blog does have very interesting postings and I can thoroughly recommend it. 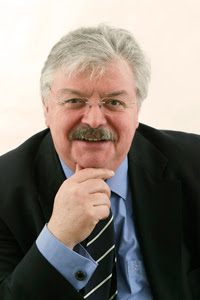 It reported on August 8 that a planned demonstration for September 11, the sixth anniversary of those aircraft flying into the World Trade Centre and the Pentagon, against the Islamisation of Europe, has been banned by the Mayor of Brussels, one Freddy Thielemans (pictured).

The statement was published after consultation with the police chief and sundry other individuals and the reason given is public safety. The Islamic population of Brussels might take such a demonstration amiss and there might be trouble. Of course, many a demonstration invites counter-demonstrations and normally the police lines up to separate the two groups. We have all seen this on various occasions. It seems that the Belgian police cannot cope with the potential problems and one can only assume that the next Rage Demo because somebody dares to say something that the Islamists do not like will also be banned.

The three organizations involved Pax Europe, SIAD and SIOE, have announced that they intend to go ahead and demonstrate anyway, pointing out that as they intend to go about their business peacefully, they cannot be banned. They might find that water canons are not very comfortable to live with even for a short period of time.

The latest news from these organizations that they will decide tomorrow what to do about the demonstration.

Of course, they might have a demonstration protesting the ban, which presumably would so anger the police and political chiefs of Brussels that trouble between the two groups might ensue. One can think of other scenarios.

In the meantime, they have put a petition on line, asking the Mayor of Brussels to reconsider his decision and pointing out that the mere fact that the authorities are too scared to allow it to take place proves the point of the organizers – freedom of speech and freedom of assembly are being denied in the name of not upsetting the more extreme Islamic groups.

There are more articles on the subject on Gates of Vienna, some more accurate than others. Caveat emptor.
Posted by Helen at 23:03