No such thing as bad publicity 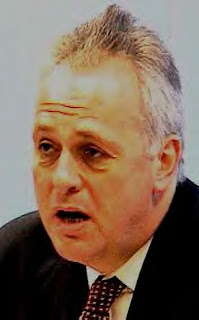 The Telegraph newspapers appear to be dedicated to spreading the word about Lord Malloch-Brown, our favourite Minister of State in what is beginning to look like another one-man-band government. There really is very little difference between Gordon Brown and Tony Blair, except for one thing: we still do not know what Mr Brown really thinks about the big wide world out there.

The Telegraph newspapers and the Shadow Foreign Secretary seem to be quite certain that the real problem is Lord Malloch-Brown (formerly known as Mark Malloch Brown, interference runner for SecGen Kofi Annan and best friend of George Soros). While they all seem to oppose him they also have accepted his own evaluation of himself – the greatest, as Muhammad Ali used to say about himself.

First there was that interview with Rachel Sylvester and Alice Thomson in which Lord Malloch-Brown told the incredulous world that he was the man whom everybody admired and whose advice and management everybody wanted when tricky problems cropped up. Somehow, none of those plans of putting him in charge ever worked out but they all from Secretary of State Condoleezza Rice on asked for him.

After that interview both the Prime Minister and the Foreign Secretary hastily explained that Lord Malloch-Brown was Minister of State in charge of Africa, Asia and the UN. That’s it.

Since then we had William Hague digging up the somewhat ancient story about Malloch Brown musing about the EU taking over Britain’s permanent seat on the UN Security Council. As we have repeated ad nauseam, whatever the man says, there is nothing in the Constitutional Reform Treaty that would mean that. But then we do suspect that Mr Hague has been too busy to read the actual text of the treaty.

Now we have William Langley wittily providing Lord Malloch-Brown with more publicity. Mr Langley does not seem to like the recently ennobled peer and considers his big mouth to be his worst enemy. Well, one might agree with that.

Mr Langley also gets one or two things wrong. He seems to have accepted without any thought that the neocons had “hijacked” American foreign policy despite the many articles and essays that have shown the opposite with a good deal of evidence.

He also seems to think that Lord Malloch-Brown’s remit is Africa, Asia and Afghanistan with no mention of the UN or as Wee William Hague says, UN reform.

While mentioning the curious story of Malloch Brown’s habitation in George Soros’s swanky property in Westchester, he omits other matters such as his Vice-Presidency of the Hedge Fund and involvement with Open Society. He does, however, refer to a particularly virulent article in the Wall Street Journal, which had followed the scandals in the UN. It is worth reading the piece in full.

So there we are. The Telegraph and the Conservative Party do not like Lord Malloch-Brown. So far, so good. How many more articles are we going to have to tell us that without giving any new information?

Actually I am wrong: there is one piece of information in Langley's article, which is new and startling, if true. Apparently, "unusually for a junior minister, he asked for and was granted a grace-and-favour residence by the Government". As the twig bends…