What hope is there? 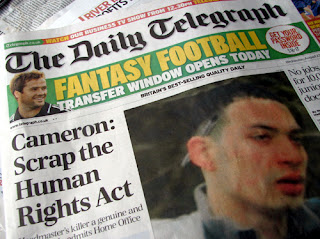 A clear divide is emerging on the reporting of the Chindamo affair.

The Guardian tells us: "Papers reveal truth behind decision not to deport killer", its story opening with the lines:

The detailed written judgement in the case of what should happen to the Italian-born Learco Chindamo, now aged 26, when he finishes his minimum 12-year life sentence next April makes clear that the decision was taken on the basis of "compelling" European Union law that applies to any EU citizen resident in another EU country for at least 10 years.

That "take" on the affair gets support from Politics.co.uk which headlines, "Chindamo deportation barred under EU law", thus cementing in the reality.

But all this is swamped by the torrent of extruded verbal material from The Daily Mail which still homes in on the Human Rights Act, recognising the role of the EU only to complain that Justice Secretary Jack Straw, "tried to absolve the Human Rights Act of blame for the fiasco, claiming EU law was mainly responsible."

The Sun takes a similar line, declaring in its leader:

So-called Justice Secretary Jack Straw then tries to dodge blame by claiming Chindamo’s victory owes nothing to the Human Rights Act. It is all down to an EU directive, he says. A directive HE signed as Foreign Secretary in 2004.

But, for unexpurgated drivel, cut to the front page of The Daily Telegraph, with Cameron calling for the Human Rights Act to be scrapped, "amid mounting anger that the controversial law had allowed the killer of the head teacher Philip Lawrence to escape deportation."

It is no wonder that the electorate is so confused as to the role of the European Union in running our country. If major newspapers and the Tory party cannot get it right, what hope is there?