What is the point of Amnesty International? 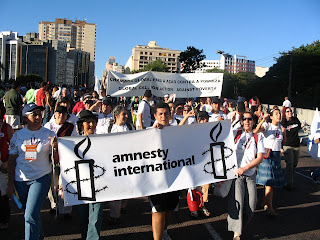 I know what used to be the point of Amnesty International – it helped to free political prisoners around the world. It did so by drawing attention to their existence and their plight and by campaigning in various ways for their release. The people in question had to be prisoners for political reasons even if there were some trumped up criminal charges.

Amnesty International was unique in it concentration on this issue. It was also (and probably still is) unique in its dual structure of a central research and political structure and individual campaigning groups in various countries, whose task it was to campaign for prisoners in other countries.

I recall there being problems with some of the country groups even back in the Cold War days, in that a number of them refused to campaign for political prisoners and prisoners of conscience in the Soviet Union or other Communist states. Other campaigning organizations had to be formed in those countries.

Nevertheless, Amnesty International at the centre continued with the good work and many people around the world owed their life and liberty to it.

Things have changed somewhat. These days it is routinely described as being a political organization, which means it has lost its neutrality and is no longer seen as useful for one particular purpose. For myself, I have always thought that the change came when Amnesty International started to campaign against capital punishment anywhere and under any circumstance.

This has nothing to do with my own opinions on capital punishment, which I am not about to disclose as they are irrelevant to this blog. Nor will there be a discussion about it on the forum. This is a thread about a powerful NGO not about difficult moral issues.

The point is that capital punishment, if it is given out after a free and fair trial for a crime that is known to carry that sentence, is not a form of political oppression or injustice. By deciding to add that issue to their other ones Amnesty International proclaimed in effect that it was no longer campaigning for political prisoners but taking on political issues.

I am delighted to discover, somewhat belatedly, that O’Sullivan’s First Law, known to me for a long time, that any organization not actually right-wing will over time become left-wing, was formulated specifically with Amnesty International in mind and in response to the decision to start campaigning against all capital punishment.

Since then Amnesty International has gone from bad to worse, becoming an organization that is supposedly campaigning for human rights, whatever they may be and has lined up on the anti-American, anti-Western, pro-tranzi, pro-NGO side. We have documented their behaviour on various occasions and here is one example.

The organization has been expanding its remit again. For some time there has been talk of them becoming involved in “development issues”, which will mean, one presumes, demands for more aid from the poor of the Western countries to the rich of the developing ones. There has been talk about them campaigning against domestic violence though I do not know whether that has come to anything.

With domestic violence I can be quite open – I am against it, no matter who is inflicting it on whom. But there are many organizations dealing with it (though not all that many who talk of domestic violence in societies where it is more or less accepted and even praised by certain religious teachers and I do not mean Britain or the United States). It is not Amenesty’s job to get involved in it, unless they really do feel that in certain countries it is used for political purposes.

The latest announcement is that Amnesty International has decided to campaign for abortion rights for women who have been raped. It is not entirely clear to me even from the organization’s statement, made in response to the Vatican’s criticism how far they intend to go with this eventually.

There are, of course, many stories of women (and children) being raped in various wars, not least, as we have discussed before, by UN troops in Africa. Whether abortion is quite the right solution to those women’s problems and whether this is feasible in those circumstances are both moot points.

The Catholic Church, until now a strong supporter of Amnesty International, is speaking out against this particular policy and the organization is clearly scrambling to do some damage limitation.

As with capital punishment, so with abortion: my own views are irrelevant and will not be explained or discussed. In fact, neither will be discussed on the forum, which does not deal with those matters. (There are plenty out there that do.) The point I am making is about Amnesty International, an organization that uses its credibility to intervene in political processes and discussions. That credibility has long ago been squandered.