You pays your money… 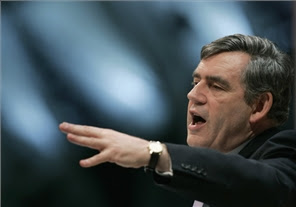 To get another illustration of how wonderfully reliable the MSM really is, you can feast your eyes upon this.

Firstly, we have The People yesterday. It boasts an exclusive, with the headline, "Brown poised to call a snap election", with a prediction that Labour will beat the Tories by 160 seats and that the "landslide" would be the end for Cameron.

These, we are told, are "computer predictions" of the result if Brown goes to the polls on 25 October, prepared by forecasters Electoral Calculus run by Martin Baxter "who was only one seat out when Tony Blair won his massive 1997 victory".

Now cut to today's Guardian which has it that, "Gordon Brown would risk the possible loss of his parliamentary majority if he gambled and held an early general election this autumn."

This is an analysis based on a Guardian/ICM poll, which shows Labour's lead narrowing slightly to five points amid signs of rising Conservative support. Support for the Labour stands at 39 percent, up one point on last month's survey, but Conservative support has increased by two points to 34 percent.

Nevertheless, this blog stands by the view that talk of an early election is merely political fluff. Our money is on Brown going full term to 2010. Dropping hints of an October contest is a wonderful way of keeping the Tories on the back foot and the political hacks occupied.

It is unlikely, therefore – in our view – that we can rely on an election to force the EU referendum issue.