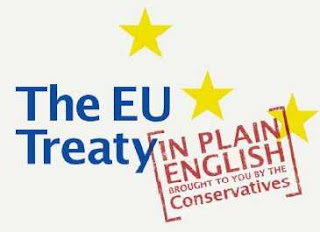 Click on the link that tells you that you can read "the EU treaty – in plain English" and you find yourself with a copy of a slender, four-page brochure produced by the Conservative Party. If a commercial firm did that, it would be called "passing off" and Trading Standards would be very interested.

However, this is all part of the brave new venture by the Conservatives who, by their own account, "have stepped up the pressure on Gordon Brown to stage a referendum on the new EU Treaty", they claim, "by publishing a translated version of the treaty 'in plain English'".

There is a second link, which tells you to "click here to read the EU constitution by another name" but, when you do, all you get (at the time of writing) is the message illustrated below – sort of appropriate for that Party. Never mind, you can pick up your English copy from the EU Council website, where it has been available for just over a week.

Nevertheless, the effort is applauded by Tory Diary as "excellent work by the party", which goes to suggest either that they are rather easily pleased, or desperate to show that their beloved party is actually doing something.

Of the leaflet itself, it follows down the well-worn path that Brown and his FCO chums will have seen coming from miles (or kilometers). And, equally predictably, the payoff line is: "The British people were promised a referendum. That promise must be kept. It is a matter of trust."

Needless to say, there is no mention of the new status of the European Council or any of the issues raised by Booker in his Daily Mail piece today. As we have observed, Hague has fixed the narrative, and nothing must be allowed to change that.