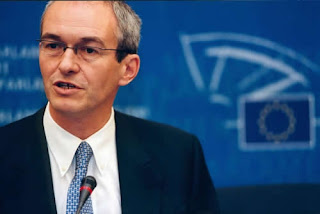 Peter Riddell in The Times this morning seems to agree with Tory Diary that the worst is over for Cameron. This is not least because of his Party's stance on the EU referendum, where Labour ministers, "have appeared to be reacting, rather than setting the agenda."

That the ground is slipping away is presumably what has brought arch-Europhile, MEP Richard Corbett out of the woodwork, with a piece in the Guardian's "comment is free" slot. But, if there was a place in the Guinness Book of Records for the number of lies and half truths that can be packed into a piece of text, Corbett would be the world record holder.

Yet, observes Corbett – i.e., despite the new treaty merely "focusing on modest adjustments" - "some are still advocating a referendum".

Oddly enough, in June 2005, Corbett complained about an attack by The Times on his beloved constitution: "No attempt at argument, no analysis or discussion … Trashing the EU constitution with a few empty soundbites …".

But, when it comes to trashing those whom he happily refers to as "Europhobes", it seems that it is perfectly acceptable to rely on "a few empty soundbites".