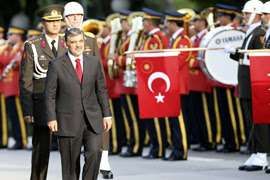 It is a little hard to understand some of the kerfuffle around the election of Abdullah Gül as Turkey’s new president. One can quite understand the Turks being a little wary and the army casually mentioning that they do have a role in the Turkish constitution as its guardian and promoter. In fact, military commanders were absent from the swearing in of the President.

In the first place I find it hard to understand why there were no candidates apart from Gül. In the circumstances everybody knew that he would not go through on the first two rounds because his party did not have the required majority but would do so on the third round.

According to Al-Jazeera, Gül’s wife, she of the elegant silk headscarf, also stayed away, leaving us all with the question of how exactly they are going to resolve the problem of women not being allowed to wear headscarves in public buildings in Turkey. Will the new President and his wife pretend that it is merely a fashion statement?

Gül is being described variously as “the first former Islamist to win the post in Turkey's modern history” and as a “a devout Muslim with a background in political Islam”. While it is not impossible to be both there do seem to be certain difficulties in the way.

Then again, President Gül’s first statement made it clear that he does not intend to undermine the Turkish constitution or its secular state. Zaman reports that in an essay just before the fully predicted election

Gül also gave two basic goals for Turkey's foreign policy vision: "The first target is to become an integral part of the European Union. Full membership to the EU does not set an alternative to Turkey's powerful transatlantic bonds and its strategic ties with the US. The second target is to create an environment of security, stability, welfare, friendship and cooperation in the areas surrounding the country, located as it is in the natural center of the Balkans, the Caucasus, the Black Sea, the Middle East, Central Asia, and Europe, which all have an important place in Turkey's foreign policy."

Whether the first of those is feasible or not remains to be seen. President Sarkozy, for one, intends to make sure that every difficulty is piled in Turkey’s way. Nor is it entirely clear whether it is possible to be an integral part of the European Union (is that the same as being a Member State or are the Turks playing a little game here) and keep those powerful transatlantic ties, though the East European countries seem to be doing all right on that.

The second goal can be described as motherhood and apple-pie stuff but it is interesting that the new President is using language that is a far cry from what one would expect from an Islamist, even a former Islamist.

It is no secret to those few who read my postings on this blog that I do tend to root for Turkey, partly because I find the country and its history fascinating and partly because it is a deliberately secular Muslim country. It is not the only one with a more or less democratic constitution – Jordan is one and both Malaysia and Indonesia are close – but it is the one that may show the way forward for other countries, such as Iraq.

If a religious Muslim can be the President of a secularist Islamic country without upsetting that balance, it will be a big step for all of us towards some sort of a settlement across the former Ottoman Empire.

Then again, the fears of the secularists are not surprising and the army might still play the Joker.

Meanwhile, President Sarkozy, Rambo in the Elysée, as Spiegel describes him, has been musing on his 100 days (a little more successful than Napoleon’s were) though he does seem to spend a good deal of time on holiday, as the dissident frogman points out.

He has been coy about Turkish membership, which may have repercussions in Turkey but then, if he welcomed it, there would have been repercussions in France, the last thing Sarko wants as he pretends that the French vote against the European Constitution was of no significance.

In the speech, he also called on the European Union to adopt a more unified and bolder security strategy. He suggested that he might support Germany's bid to be secure a seat on the United Nations Security Council. He also chided Russia for using a "certain brutality" in its political use of energy supplies, and he urged the international community to prevent Iran from obtaining nuclear arms.

According to Deutsche Welle, as reported by Focus Information Agency, “Sarkozy said Japan, India and Brazil should also be granted permanent seats”. Quite right, too. The more countries have permanent seats the less that pesky Security Council will be able to decide on anything. And the more difficult it will be for the likes of Lord Malloch-Brown to advocate a seat for the European Union.