A portrait of a Europhile 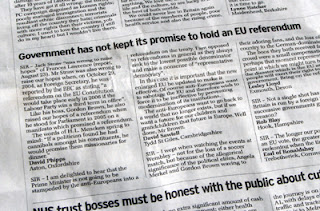 The voice of the authentic Europhile graces the letter page of The Daily Telegraph today, a certain Mr David Sawtell, of Tydd St Giles, Cambridgeshire.

He is delighted to hear that the prime minister is not going to be "stampeded" by the "anti-Europeans" into a referendum on the treaty. "I am opposed to referendums in general," he writes, "as they always sink to the lowest possible denominator and make a nonsense of "representative democracy".

In Sawtell's view, "it is important that the new enlarged EU be updated to make it effective." Of course, he adds, "anti-Europeans want to sabotage the EU and therefore wish to force it to be ineffective by preventing modernisation of its institutions. The anti-Europeans want to go back to a world that no longer exists, but if we want a future for our children and grandchildren that future is Europe." He concludes, "Well done, Mr Brown".

Interestingly, Mr Sawtell is no stranger to the letters pages of diverse publications.

As early as January 2001, he was writing to The Daily Mirror declaiming Metric Martyr Steve Thoburn's stand as a "publicity stunt", telling us that a casual glance at his supporters "reveals all".

In August 2003, he was writing to The Independent on the Hutton enquiry, telling readers that he was, "heartily sick of the media frenzy over this affair." Dr Kelly, he wrote, was the author of his own downfall, he broke the golden rule for civil servants, he made an unauthorised statement to the media.

Dr Kelly could then not complain when he was called to account for his actions. One cannot expect protection from the department one has betrayed. All civil servants should heed the warning and renew their vows of silence.

Come April 2004, he was pronouncing on the EU constitution. It was, he wrote, "a vital piece of legislation that will enable an EU of 25 to function." A referendum in Britain, he continued, "means that the decision will be taken by the media moguls who own the tabloid press."

In my view, wrote Sawtell, "we are approaching a situation where Britain will have to leave the EU. A catastrophe for Britain, but one state cannot be permitted to harm the other 24. I wanted my homeland to play a full role within Europe, but we must face facts: the bulk of the media control the minds of the British population and the media are anti-European."

September of that year again saw Mr Sawtell writing to The Independent, lauding the splendid achievement of "our European golfers". This demonstrated what Europeans can do when they work in unison. "No single European state," he wrote, "could have even come near the USA. Let us hope that the people of Britain will learn the lesson and not allow themselves to be deluded by the anti-Europeans into going into isolation. Britain is part of Europe and the EU is our future."

In December 2004, he was back in The Independent, this time springing to the defence of Blunkett. "Here we go again," he wrote. "An able and effective minister of the Crown is being systematically destroyed by the media because of his private life. He is not the first nor will he be the last to suffer in this way. Only Parliament has the power to deal with the media by way of a draconian privacy law. If we continue as at present only eunuchs will dare to stand for public office."

On 3 May 2006, he was writing to the Independent, railing against the "gutter press" for poking their noses into John Prescott's private life. He called for parliament to enact draconian privacy laws that would make it essential for the media to obtain the written consent of both parties before publication. Unless and until this is done, wrote Mr Sawtell, "there will be a continuous stream of ruined careers and wrecked lives while the media moguls get fat on the proceeds."

In February 2007, he was again writing to his favourite newspaper, on the "cash for honours" issue, declaring that: "The present media hysteria about our Prime Minister is even more disgraceful than usual, if that is possible. To date the police have found nothing. No one has been charged, still less found guilty of anything; and yet our disgusting media are in a frenzy of hatred. Given the totally undesirable influence the media have on public opinion it is scarcely surprising that opinion polls are also in a state of flux."

Thankfully, added Sawtell, the prime minister is keeping his nerve and is following the injunction of Rudyard Kipling: "Keep your head when all about you are losing theirs and blaming it on you." "This nation does not know how good a Prime Minister they have," he declared.

So there you are: a portrait of the perfect Europhile, an example to them all. What was that about: you shall be known by the company you keep?