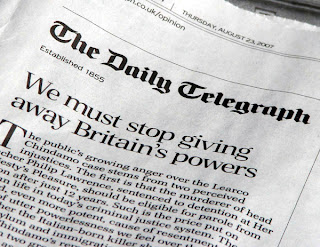 It is rather instructive to read the first three letters in The Daily Telegraph today on the lead subject of Philip Lawrence’s murderer.

Under the general heading, "European law prevents the deportation of Philip Lawrence's murderer," the first two, respectively Harry Randall and Stuart Noyes – blog readers both – inform us that the Human Rights Act is irrelevant in the case of Learco Chindamo, as EU law takes precedence.

Randall tells us that Chindamo has further protection from Article 33 of EU Directive 2004/38, while Noyes writes that, "You simply have to read the 33-page judgment of Chindamo's case to realise his right to stay here is afforded him primarily by European treaties."

The third letter, however, is least informed and it comes as no surprise that the writer is Conservative MP Douglas Carswell. Supposedly a "good guy", he completely misses the point, and prates on about "serving on Parliament's human rights committee," from which experience he has "become convinced that we must not only axe the Human Rights Act, but quit the European Convention on Human Rights."

Thank you Mr Carswell. Next!

The newspaper itself is only belatedly catching up (after intense behind-the-scenes lobbying) and, in its leader, only grudgingly acknowledges the role of EU legislation. Even then, in relegating EU law to a secondary position behind the HRA, it is unable to admit how spectacularly wrong it got its story yesterday, leaving it trailing two days behind this blog.

Similarly, the two Tory "big hitter" blogs, Tory Diary and Iain Dale, went galloping down the Human Rights Act cul-de-sac, in the wake of their pathetically ill-informed leader, provoking a torrent of similarly ill-informed commentary on the same subject, from their own readers. Significantly, both blogs have scurried away from the subject, leaving their readers as ignorant as when they started.

The interesting thing about all this is that the whole affair is another example of the subtle shift in the hierarchy of information gathering and dissemination. In pre-internet days, the founts of all wisdom were the media and the political classes – who were closer to the seat of power and thus better informed.

But, as information has gone on-line, there is now a small but growing band of "ordinary" people – remote from the traditional "gatekeepers" – who are better informed than those who would seek to inform them.

Unaware of quite how the balance has shifted, and very often remote from the new information network, the likes of MPs and journalists often labour under the impression that they are still the custodians of truth and wisdom. But, as they peddle their substandard wares, all they are doing is displaying the fact that slowly, insidiously, they are losing their grip.

These last three days have been a good example of this dynamic, and there will be many more to come. The chattering classes may continue to chatter but, if information is power, their power is draining away.