"A public relations disaster for the US" 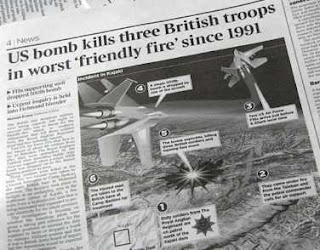 It was a ghastly little BBC hackette speaking from Washington who smugly intoned last night that the dreadful "friendly fire" incident, which we reported yesterday, was "a public relations disaster for the US".

That is, of course, how the BBC would like the incident to be viewed, but much of today's crop of newspapers seems to think otherwise.

Perhaps the most encouraging response is a passage in The Daily Mail, retailing the views of "one Royal Navy Fleet Air Arm officer who has been closely involved in similar missions in Afghanistan". He says:

This certainly doesn't sound like a case of blundering pilots attacking for no good reason. Close Air Support in Afghanistan has been immensely difficult at times. It's dreadful that this has happened but don't forget a lot of Coalition lives have been saved through similar missions. The Taliban have learned that if they can get close enough to our troops it makes it very hard for pilots overhead to target them.

The Royal Navy officer then adds:

I've known of cases where our forward air controllers on the ground have told pilots to drop almost on top of their own position, and then had to hunker down and pray that the blast kills the enemy and not them.

Even The Sun, which might have been expected to launch into a rampant anti-American mode, was relatively restrained. It noted that, although seven British servicemen have died in so-called 'blue-on-blue' incidents in Iraq since 2003, "this is only the second such incident in Afghanistan," adding:

Military insiders believe that record is almost miraculous, considering how many times British and U.S. jets have dropped bombs dangerously near to friendly ground troops who are in danger of being over-run by the enemy. 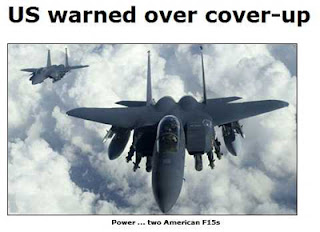 It then offered the views of General Sir Antony Walker, who said that the Americans "must come clean in their investigation," but then stressed that, "we must NOT engage in ritual Yank-bashing".

It was The Times, therefore – almost on its own, that led the way in precisely that, "ritual Yank-bashing", offering an online piece headed: "'They fire first and think later,' say British soldiers", by Tim Albone in Kabul. However, the paper seems to have thought better and the report does not appear in the print edition. The print coverage is fairly measured, albeit under a somewhat lurid headline.

Needless to say, The Guardian sticks the knife in and delights in twisting it, with a report headed: "Mounting toll of 'blue on blue' errors", launching its coverage with, "US forces have repeatedly been criticised for friendly fire incidents and for killing innocent civilians in Afghanistan and elsewhere."

A similar and entirely predictable line is taken by The Independent which will have you believe that "Tensions (between American and British forces) rise after three British soldiers killed in US airstrike".

But by far the most interesting coverage is from The DailyTelegraph, which offers a number of reports and a leader, covering a wide spectrum of issues – so much so that we need to look at them in a separate post (later today).

On balance, however, the media seem to be reporting this incident for what it was – an unfortunate, tragic accident. Nevertheless, the issues raised (political and military) are profound, and we will be examining them further.