We are not wrong 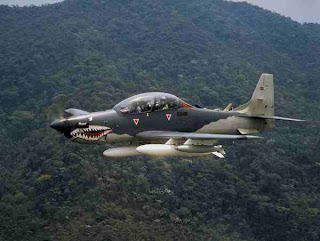 When, like this blog, we are so often far out on a limb, discussing ideas that no one else seems to be looking at – with critics lining up to pick holes in the arguments or tell us we've simply got it wrong (as they did when we advocated better armoured vehicles for our troops in Iraq), the sheer weight of contrary opinion, combined with the isolation, does make you seriously question your own arguments (and even your own sanity).

Readers' comments on the forum and the steady flow of supportive e-mails, therefore, do give us an important boost and help us keep going. And, in this case, several have sent me a link from the excellent military site, Strategy Page, headed: "Blackwater Buys Brazilian Bombers". It is fairly short, so I reproduce it here in full:

The Super Tucano is basically a prop driven trainer that is equipped for combat missions. The aircraft can carry up to 1.5 tons of weapons, including 12.7mm machine-guns, bombs and missiles. The aircraft cruises at about 300 knots and can stay in the air for about 6.5 hours per sortie. One of the options is a FLIR (infrared radar that produces a photo realistic video image in any weather) and a fire control system for bombing.

Colombia is using the Super Tucanos for counter-insurgency work (there are over 20,000 armed rebels and drug gang gunmen in the country). The aircraft is also used for border patrol. The U.S. Air Force is watching that quite closely. The Super Tucano costs $9 million each, and come in one or two seat versions. The bubble canopy provides excellent visibility. This, coupled with its slow speed (versus jets), makes it an excellent ground attack aircraft.

Blackwater already has a force of armed helicopters in Iraq, and apparently wants something a little faster, and more heavily armed, to fulfil its security contracts overseas.

One of our readers noted that this was private enterprise scoring again, and indeed it is. The company has a major operation in Iraq and consistently leaves the traditional military flat-footed, trailing in its wake when it comes to innovation, flexibility and economy. 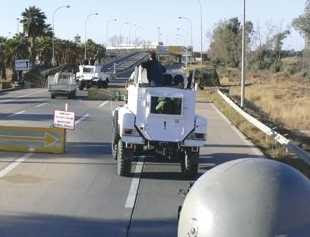 While the British Army was still pratting about equipping its troops with desperately vulnerable "Snatch" Land Rovers, Blackwater was equipping its people with the highly protected Mamba mine protected vehicles – ironically purchased second-hand, for a song, from the British Army after it had failed to see their potential for high-risk tasks in Southern Iraq.

The vehicles operated by Blackwater sustained several IED hits, their occupants escaping without injury, an experience which indicates that, had the criminally stupid fools geniuses in the MoD and Army kept hold of the vehicles and used them properly, a number of soldiers who were killed in "Snatch" Land Rovers would be alive today.

Similarly, while the Army is messing about with limited numbers of useless Lynx helicopters (useless because they cannot fly in the heat of the Iraqi summer) - and are proposing to buy the obscenely expensive Future Lynx at an average cost of £14 million - Blackwater have been successfully operating a version of the MD 500 helicopter, for convoy escort duties and as a light, tactical gunship. 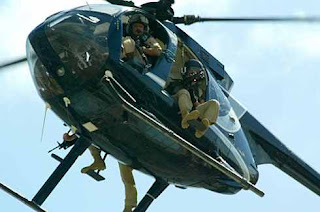 In the latter role, compared with the Army's Apache assault helicopters – more than a quarter of which are currently grounded through lack of spares – the Apache cost £60 million each, while MD 500s, brand new, cost less than £1 million. For sure, the Apache is vastly superior to the MD 500 (when they can get it flying), but pound for pound, which would provide more protection for our troops – one Apache (most likely sitting in the repair shop) or 60 MD 500s?

Clearly, Blackwater did their sums, as they have done with the Tucano. At a cost of less than £5 million (and an operating cost in the order of £5000 an hour) it will be doing a job that we are gearing up to use the £80 million Eurofighter (and are currently using Harriers at £37,000 an hour). Which would be better value – one Eurofighter (most likely sitting in the repair shop) or 16 Tucanos?

Yet, despite rehearsing these issues again and again, as a blog, we are still largely out on our own. Thus, with the aid of our readers, we have occasionally to remind ourselves: we are not wrong. I will say it again.

We are not wrong.

Email ThisBlogThis!Share to TwitterShare to FacebookShare to Pinterest
Labels: Mamba