What is it trying to achieve? 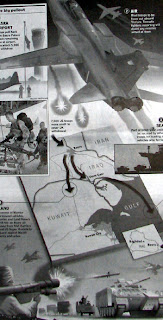 It is worth noting that the Sunday Times, it seems, went into hyperventilation mode yesterday, with a front-page article headed, "Britain faces Iraq rout says US."

It then picked up the theme in a focus piece, this one headed "Army chiefs fear Iraq exit will be Britain's Saigon moment," telling us that: "British troops will start to pull back from Basra next month, and the withdrawal is predicted to be 'ugly and embarrassing'".

However, not only are both pieces co-authored by Mick Smith, the man who thought RG-31s were "too big for Basra", with Washington input from Sarah Baxter, the pair rely for the substance of their reports on an American called Stephen Biddle. He, it appears, is the "US".

Yet, although he is described as a "military adviser to president George W Bush", he is no such thing. The best he can claim – like many of his ilk – is to have presented "briefings" to the president and senior political and military leaders – as well as "White House staff". This Washington-speak for being one of the numerous denizens of the beltway who is called upon by the White House and the Pentagon to air his views. By no measure can he be considered an "advisor" in the sense that his views are either influential or trusted - or in any way representative of the official US view.

More prosaically, Biddle is a senior fellow in defence policy at the left-leaning Council on Foreign Relations (CFR). According to a 2006 paper, he was a strong critic of Bush's prosecution of the war in Iraq but, in a presentation to the House of Representatives in July, he was edging to qualified support of the surge.

Nothing of the main thesis that the two Sunday Times journalists have to offer, therefore, has any more status than informed (but sometimes partisan) speculation from a minor-league American academic.

Nevertheless, through Biddle, the Smith/Baxter pair speculate on the British withdrawal of troops from Basra Palace, which they call the "Saigon moment". They cite Biddle stating that Iran would use its influence with the Shi'ite Mahdi Army to exploit the situation. they then have Biddle say that, "It will be a hard withdrawal. They want the image of a British defeat ... It will be ugly and embarrassing." 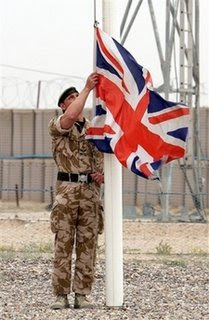 That indeed might be the case but it also has to be recalled that the last three withdrawals have been relatively trouble free – with the bases being handed over to the Iraqi 10th Division. Given that both the Old State Building and the Shatt al Arab bases were also taking heavy fire from the Militias prior to the British departure, it cannot be said, necessarily, that leaving Basra Palace will be traumatic.

However, the Smith/Baxter pair not only want to turn this event into a bloodbath, they then speculate on the full withdrawal from Basra Air Station. With comic-book graphics illustrating this scenario (above left), they pile on the agony with a lurid account of what might happen.

But, in one tiny paragraph we learn that Brown has not made any decision to withdraw. Furthermore, he has pledged to Bush that he will not consider any such decision until October, when the preliminary results of the "surge" are in. Therefore, there is no confirmation at all that British troops are finally leaving Iraq. The speculation, as we have seen before, is speculation upon speculation.

Not for the first time, one really does wonder what this newspaper thinks it is trying to achieve with such reports.