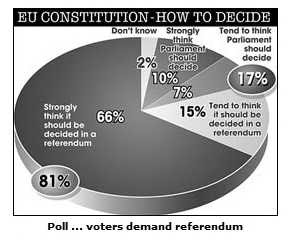 With that headline, no one could ever accuse The Sun of subtlety.

Thus, on the back of a general opinion poll which gives Brown a five point lead over Cameron, it picks up the response to a referendum question. This shows a massive 81 percent in favour of a referendum on the new EU constitution treaty, with 66 percent strongly in favour of a poll. Only 17 percent agreed that Parliament should decide.

Devoting its lead editorial to the issue, the paper notes that Brown is halfway through his honeymoon period, head and shoulders above Cameron in almost every department. More than half of voters think Brown is more trustworthy than the Tory leader.

But, says The Sun, "that trust will ebb away if he fails to honour Tony Blair’s promise of a referendum on the EU constitutional treaty. And then the honeymoon will be well and truly over."