Yet another fine mess 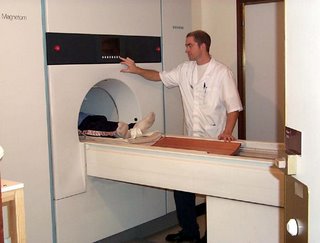 It was picked up by The Times, the BBC and others in September last year, but it hasn't gone away.

We are talking here about Directive 2004/40/EC, known as the Physical Agents (Electromagnetic Fields) Directive, which sets absolute limits for workplace exposure to electromagnetic fields. It was adopted by the EU last year and must be incorporated into member states' national law by 2008.

Back in September, The Times was warning that the directive could needlessly endanger the health of thousands of British patients, many of them children, make illegal up to 30 per cent of the scans conducted in Britain each year, including half of those performed on children.

There are almost 500 MRI scanners in UK hospitals, performing over one million examinations each year. The government has recently invested around £100 million in over 100 new scanners.

The problem arises because medical workers who have to stand close to MRI scanners during imaging - which is required for certain types of treatment - are exposed to levels substantially above the limits set by the directive. The UK is especially badly affected as it is here that new uses of MRI have been pioneered, which let doctors see how treatments are working. These will also be prohibited under the new law.

However, there is absolutely no evidence that this exposure carried any risk, which led The Times to cite "leading experts on magnetic resonance imaging", including a scientist who won a Nobel prize for pioneering the technology, declaring that a particularly perverse consequence of the directive would be that many of those who would benefit from MRI scans will instead have X-rays, which are well established to pose a much greater danger to both patients and medical staff.

Back in September, a group of 12 MRI specialists wrote to heath secretary Patricia Hewitt, urging an amendment of the directive to reduce its impact on medical scanning.

The EU commission itself is now well aware of the problem, having published the British scientific reservations on its website in early February, but there is no record of it having taken any action.

Thus it was that two days ago, the Institute of Physics organised a meeting with other learned societies, to raise the alarm once again. At the meeting, professor Penny Gowland dismissed the directive as “overcautious and based on sparse scientific evidence”

Now, the Institute together with four other scientific organisations, has written to the House of Commons Science and Technology Committee to highlight the concerns over the proposed restrictions and the effects they will have both on research into and the treatment of life-threatening diseases such as cancer. They have also written to Vladimir Spidla, the commissioner for social affairs to call upon the commission urgently to review the directive.

Needless to say, this directive was scrutinised by the Council and our highly-paid MEPs, and subject to a regulatory impact assessment by the HSE, but none of these august bodies managed to identify this serious and life-threatening problem - and none opposed the directive.

And, despite a promise of government action, at this time, we are no further forward.

What a way to run a railway (not).