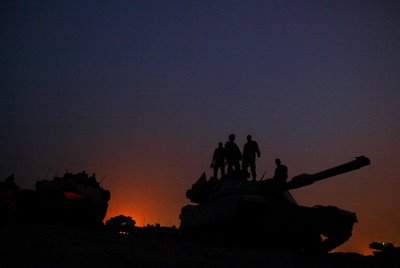 Tomorrow, as today's newspapers have been quick to remind us, is the third anniversary of the invasion of Iraq, the so called "Operation Iraqi Freedom".

Whatever the issues, and we will explore some of them in the coming days, the participation of British troops alongside the Americans has given the appearance of a strengthened Atlantic alliance. It has also given rise to many accusations that Tony Blair is but a poodle of the United States, and Mr Bush in particular.

Looking back over the years, however, one can argue that our current involvement in Iraq is driven by political motives other than support of the United States.

In the first instance, the 2003 invasion can be regarded as unfinished business, left over from Desert Storm in 1991, the liberation of Kuwait. But, politically, the genesis possibly lies in the Falklands War of 1982, which is largely credited with winning Margaret Thatcher her second term, with a massive majority, in the June 1983 general election.

We tend to forget now, well before 2003, Blair had been was lining up alongside the US for another military adventure. But his war-like poses were primarily aimed at securing for New Labour a second term of office. Noting how the "Falklands effect" had come to the aid of Thatcher, it was widely rehearsed at the time that Blair was looking to replicate that effect. And, although the war has backfired on him, nothing has transpired to refute those suggestions.

Another motivation, again much rehearsed at the time, was Blair's desire to prove his potency as a bridge between the United States and Europe, demonstrating that, by positive engagement with the Americans, he could influence US policy – not only on his behalf but as an emissary for the European Union.

To that extent, therefore, Blair's apparently "pro-American" policy of 1993 was not that, but an attempt to increase his own influence in the European Union, by demonstrating that he had the ear of president Bush.

As the Iraqi war has dragged on into a bloody insurgency, however, it has become fashionable – in the superficial way that so attracts the "chattering classes" – to brand Blair as an Atlanticist and Bush supporter, when the truth is far more complex and the facts may point to other conclusions. 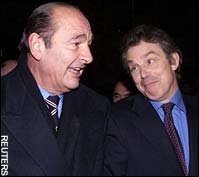 Either way, the Iraqi involvement has obscured an opposing trend within the defence and political establishments, that of the progressive European military integration. This was happening under successive Conservative administrations and continued when Blair took over, given fresh impetus by the St. Malo agreement of 1998 and the commitment, the following year, to form European Rapid Reaction Force.

Also, because the Iraqi War is the dominant defence issue, on which the media has largely concentrated, this is also the issue on which the Conservatives have concentrated, a process made easier by the fact that they are untainted by the decision to go to war – which was undertaken entirely on Blair’s watch

When it comes to European defence integration, however, the Conservatives are heavily compromised, not least by virtue of the Maastricht Treaty, which conferred on the EU powers to take action in respect of the newly created "second pillar" of the Foreign and Security Policy.

With the Conservatives so heavily compromised on that issue, they themselves have not been keen to bring it up , so there has been very little light shone on the very significant developments which have occurred since Blair’s agreement with Chirac at St. Malo, back in 1998.

Thus it is that defence policy is more a matter of obscurity compounded by confusion, which makes Booker’s column today, on the eve of the third anniversary of the Iraqi invasion, especially relevant.

Headed, "When it comes to defence, there is no Opposition", Booker notes that:

That new double-act of British politics, our Labour Government and the Not-the-Conservative Party, was to the fore in Washington last week when Lord Drayson, the defence procurement minister, addressed the Senate Armed Services Committee, supported by Tory defence spokesman Liam Fox. They "warned" senators that, unless the US lifted its embargo on the electronic "source codes" necessary to operate the Joint Strike Fighter, the British would pull out of this last major Anglo-US military project, the aircraft intended for the Royal Navy's two planned "super-carriers".

This picks up on our analyses on this blog, the latest here, where Booker records that from the way the JSF issue was presented, it seemed that this problem was all the fault of the Americans. No one bothered to explain the background - the reason our US allies have become so wary about giving us military secrets is our increasing defence entanglement with our EU "partners", particularly France. Booker continues:

Since 2000 we have been treaty-bound to hand on our military secrets to the French, who in turn have become ever closer to the Chinese, America's greatest potential enemy. So the senators that Lord Drayson was addressing fear that any secrets shared with the British may end up in Beijing.

For some time now, it has been evident that the Ministry of Defence was anticipating an end to the Joint Strike Fighter project and its replacement by the French-made Rafale, which the French plan to use on their own "super-carrier", as part of our joint contribution to the European Rapid Reaction Force. The only significance of Drayson's visit to Washington was that at last he openly admitted this.

Thus does the MoD's stealthy campaign to end our "special relationship" with the US in favour of European integration continue. Because the Tories fail to grasp what is happening, Government spin is again allowed to prevail. The media just echo the spin.

However, to be fair to the Tories, the new shadow defence secretary, Dr Liam Fox did speak to the Heritage Foundation in Washington DC on 16 Feburary, when he told his audience that there were issues which put co-operation between the UK and America at risk. Tony Blair, he said, wanted to duck the decision about where Britain's defence and security interests should gravitate towards - Washington or Brussels, continuing:

In 1998 at the French port of St. Malo Tony Blair reversed Britain's earlier Atlanticist defence strategy. He did so not, of course, because he was anti-American. He did it simply because he wanted to prove his European credentials in a way that he thought would have only a small political cost. In cooperation with France, Europe's only other nuclear power, he pledged the integration of Britain's defence effort with that of Europe. The implications of that decision have only gradually become apparent.

He went on to single out defence procurement, adding:

Defence procurement is a powerful instrument for integration, because individual decisions often receive little public attention. Which satellite system the military uses to navigate by may not sound like a matter of geopolitical importance. But we are in an age where such decisions may well end up influencing military alliances. For those who would seek to see a European army replace NATO, defence procurement offers the perfect means of undermining the Special Relationship by stealth.

There is, therefore, some indication that Fox is getting the message, although he has not conveyed his understanding of it over the JSF issue. However, he is to speak again on 21 March, billed as "one of his first major policy speeches since becoming Shadow Secretary of State for Defence".

We will await with interest to hear what he has to say.