At last they can agree 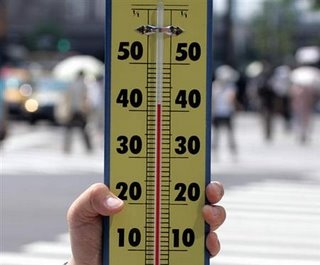 Having savaged the Services and the Ports Directive, the EU parliament has finally found something on which it can agree with the commission. After the commission proposed it in February, the parliament too wants to ban mercury in new thermometers

This is according to Reuters, which reports that MEP Marios Matsakis has drafted a resolution which echoes a the similar call from the commission.

Matsakis said he hoped the ban would be implemented within two or three years. The commission has still to publish its draft law.

This sort of sums up both institutions though – both are useless on the big issues but they are never so happy when they are contemplating banning something. Then, the fertility of their imagination seems to know no bounds as they work on expanding the list of items that can no longer be sold in the EU.

But what really makes the story is Reuter's picture (above). Although the issue is mercury thermometers, it actually shows an alcohol-in-glass thermometer (incidentally, registering a sweltering 41 degrees). Let's hope the commission and the parliament can tell the difference.