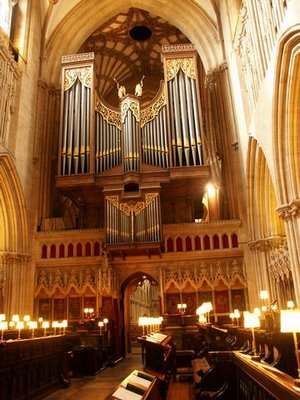 If you search for "EU" on Google "news", you will be offered 54,400 entries (currently), ostensibly a cornucopia of information about our government. But what is striking about the list of stories – or, at least the first hundred or so – is the utter banality, the subjects invoking tedium even in those amongst us who are interested in following the machinations of the "Brussels empire".

This is reflected in the daily newspapers. Never packed with information on the EU, even in quiet periods one would normally expect one or two EU-related stories in a day. Now, days on end go by with no mention. For the average reader, it must be almost as if "Brussels" has ceased to exist.

One exception today is a story in The Times, to which we had been alerted earlier by readers and from other sources, not least from the organ-builders' website, but had decided to hold off until Booker had done it in his column, after gathering more information.

This is the quite bizarre predicament in which the organ-builders of Europe find themselves unintended victims of EU Directives 2002/95/EC (Restrictions on hazardous substances) and 2002/96/EC (Waste electronic and electrical equipment).

You have to struggle through The Times's story to get to the crux of the issue but the essence is that under these joint directives, the use of lead is prohibited in any kind of electrical appliance. Those organs which are fitted with electric blowers fall under the definition of "electrical appliances" and, as organ pipes are, necessarily, a tin-lead alloy (with 50 percent of lead or more), the building or refurbishment of the same becomes illegal.

Predictably, in the shallow way that typifies the contemporary media, The Times concentrates on the consequences of this law, focusing on church instruments, noting that the organs "at Salisbury Cathedral, St Paul's in London, Worcester Cathedral, St Albans Abbey and Birmingham Town Hall" are among the first that may be silenced. They are due to be refurbished or rebuilt and will fall foul of the directives.

The substantive issue, however, is ignored – and it is this that we are researching. Essentially, the point is that both directives, in their inception, never set out to ban organs, in which sense the effect was originally unintended.

Nevertheless, the process of drafting EU law is long drawn-out and the organ-makers were quick to notify the Department of Trade and Industry (DTI) and the commission of the effects of their legislation, if it went through unaltered. Yet, despite this, the drafts were not changed and went through the whole process with the inevitable result.

Somewhere, therefore, the system failed. Quite where, why and how, we have yet to establish, but this is surely an important part of the story, which we intend to explore. After all, apart from the cultural consequences of this ban, in Britain there are about 70 companies employing about 800 people on organ-building and repairs, and all their jobs are at risk.

That we seem to be in a position where our governments, by accident, almost, can ban an important feature of "England's cultural and liturgical life", as even Europhile Tony Baldry MP put it, and completely wipe out a whole industry. This is something of considerable concern to all of us.