The UN feels left out 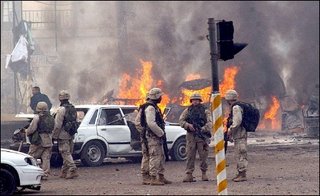 In August 2003 the UN refused American protection for its compound in Baghdad, not wishing to be seen as supportive of the war waged on the Ba’athist regime by the coalition. We can remember the outcome: a huge bomb detonated by a suicide bomber that killed 21 people, including the head of the mission, Sergio Vieira de Mello of Brazil.

Since then most of us have assumed that the UN has packed its bags and left Iraq. Not so, apparently. There is a 90-member U.N. Assistance Mission for Iraq, or UNAMI, safely ensconced in the highly secure Green Zone. And, at least, one person thinks that it is time to come out of there.

He is SecGen Kofi Annan’s Special Representative in Iraq, Ashraf Qazi, who is spending some days in Washington to discuss matters with the Pentagon, State Department and the National Security Council.

The UN, he assures us, is involved in many projects and the Americans would like them to be involved in more. But most people have no idea that this is so.

“It is a fact that the United States strongly encourages us to play a more proactive role in a whole range of activities to make an impact on Iraqi lives.

A lot of people are not aware of our contributions. … People ask 'where are you?' because they don't always notice us.

We need to do a better job in terms of enlarging the scale of our activities, being seen and being safe at the same time.”

Interestingly, Mr Qazi is not impressed by the doom-mongers.

“"What is civil war? I wouldn't say it is even a prospect right now, but there is no reason to be complacent," he said, acknowledging serious human rights violations, sectarian violence, little protection for civil servants and an absence of civil services that would make daily life easier for average Iraqis.”

Could it be that at the third anniversary of the start of the war, the UN’s representative feels that Iraq, despite its difficulties, is more likely to be a long-term success story than many other projects it is involved in?