The students are revolting (again) 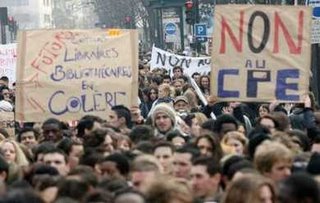 You’d think they would have other things to worry about, what with exams due in a couple of months. But no, the Paris students are out there again, demonstrating, even rioting.

This is not quite a repetition of 1968 but a bit unpleasant for Prime Minister Dominique de Villepin all the same.

As these demos are in the pretty Quartier Latin, where there are lots of attractive bars, cafes and restaurants and not in some ghastly banlieu, the journalists have been reporting them in full (more or less).

The gist of the matter is very simple. It is not about changing the world. If the Sorbonne students had wanted to do that they would have supported Villepin’s proposals. No, they would like the world to stay the same with lots of goodies for them in it and they do not realize that the world as it is, cannot afford those goodies.

French unemployment has hovered between 9 and 10 per cent for a decade now. Unemployment among young people is 23 per cent. All of that would be even higher if a large number of well educated, well qualified young French had not left the country to go and work mostly among the terrible Anglo-Saxes. Around half a million of them are in Britain and very welcome they are, too.

The situation is clearly unsustainable as even the soi-disant poet and philosopher Villepin has realized. Last year he proposed certain changes to employment rules that would make it easier to hire and fire young people for the first two years of their employment with a firm.

Up with this they will not put! As Jeff Randall put it in yesterday’s Daily Telegraph:

“Of all the subjects being taught in the country's 84 state universities, basic economics appears not to be among them. Before any more French students riot over proposed changes to employment laws, they would do well to put down Sartre for five minutes and pick up a copy of Positive Economics by Richard G Lipsey, for many years the standard A-level text book in Britain.”

The need for this sort of elementary text book is quite clear:

“Unlike some of Sartre's more testing ideas, Lipsey is simple to follow. You don't need a bottle of Calvados and a packet of Gitanes to get past the first chapter.

A quick flick through and you'll learn that the real cost of jobs comprises not just wages. Regulations that force businesses to retain staff whom they no longer need are a financial drain and lead to companies thinking twice before recruiting new workers.”

You don’t really need that bottle of Calvados for Sartre either but he and others, even more opaque, certainly seem to have befuddled those young French brains.

La jeunesse priviligée is out there demonstrating against what they see as the undermining of certainty of employment. The trouble is that a very large and growing proportion of young people is facing no certainty but that of prolonged unemployment.