Blood on the floor 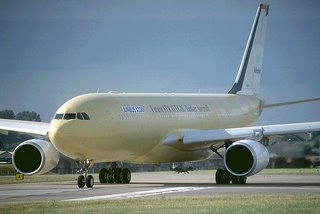 DefenseNews sheds a little light on Lord Drayson's visit to Washington today, where he is due to address the Senate Armed Services Committee on the matter of the proposed cancellation of the General Electric/Rolls-Royce F136 second engine for the Joint Strike Fighter.

Something which the MSM did not bother to tell us was that Drayson is also meeting with Pentagon acquisition chief Kenneth Krieg, Air Force Secretary Michael Wynne and Robert Joseph, the undersecretary of state for arms control and international security, with whom he will discuss the question of technology transfer. Upon the outcome may depend the decision as to whether the UK presses ahead with the JSF project.

However, we also learn from DefenseNews that this is not the only item on the agenda. Also being discussed is the fate of the MoD’s plans for a new air tanker fleet. At the moment, this is to be provided by the AirTanker consortium under a Private Finance Initiative, at a cost of £13 billion. The plan is to lease the aircraft to the RAF, with an option to charter the aircraft as civilian freighters when not required for military use.

Although the aircraft will be based on the Airbus A330, the addition of US-made refuelling gear and defensive systems classifies them as military aircraft, even when the equipment is not fitted. This brings them within the ambit of US export regulations, allowing the US government to impose restrictions on who is allowed to operate and maintain the aircraft.

Currently the US government is reserving the right to bar any workers from "access to US defence articles", the sole exceptions being British nationals who hold no dual citizenship. Hilariously, this brings the UK slap up against its EU treaty obligations for, while US restrictions prohibit anyone other than a British pilot flying the aircraft, EU rules prohibit employment discrimination amongst member state nationals on the grounds of nationality.

If Washington does not budge, says DefenseNews, Britain might have to strip U.S.-made equipment from the planes, which would likely raise costs and lower performance. This may also complicate Air Tanker's plans to raise billions of pounds to fund the programme, which it won after beating out a Boeing-led group two years ago.

Airbus parent EADS are looking for options in case Washington refuses to relent and recently offered MoD an option to build a version of the A330 without US equipment. MoD officials rejected this offer, saying that the new version would offer less military capability and would also be less interoperable with American planes if the US Air Force decides to buy A330 tankers as well.

Whether Drayson manages to come home with the bacon remains to be seen and we will be watching for developments. That also applies to the JSF deal, with Keith Hayward, head of research at the Royal Aeronautical Society, expressing some pessimism. "We have been banging on the door so long over this issue; I would be surprised if it now fell open to the extent we want it to," he says. "It's only 50/50 we will get the items on our shopping list that we need."

Elsewhere, though, there are other straws in the wind, which may hint at developments to come. Not least of these is more information on the French decision to co-operate with the UK on building its new aircraft carrier.

As we reported earlier, Paris has agreed to pay Britain more than £100 million to gain access to design work on Britain’s CVF. But the plot thickens with the French business paper Les Echos, quoting unnamed officials, saying that under the co-operative deal, France would be getting a "larger, heavier and therefore costlier" ship.

France is being presented with a 70,000-metric-ton ship costing €3 billion under the British plan, while a 60,000-metric-ton design, codenamed Juliette, from the French shipbuilder DCN would cost €2.3 billion, while France has budgeted only €1.9 billion. On its own, this simply does not stack up. France is not only paying over the odds for the British design information, it is ending up with a significantly more expensive ship as a result - further indications that a side-deal on Rafale purchase has been agreed.

On top of this is a decision announced yesterday by Saudi Arabia to acquire French-built Rafael fighters, the speculation being that 48 have been ordered, with an option for 48 more, in a deal valued at €6 billion.

This is the first time in living memory that the Saudis have agreed to buy French aircraft and, coming on top of the recent Eurofighter order, raises questions as to why they should want to operate a mixed fleet, where the Eurofighter is capable of performing all the missions for which the Rafale might be tasked.

Leaving that question hanging, Turkey is also moving into the Eurofighter sphere, having issued a request for information (RfI), the formal launching of what could potentially be a multibillion-dollar contract for the aircraft. The RfI also was sent to Lockheed Martin, maker of the future F-35 Joint Strike Fighter (JSF), and to Boeing. By the end of 2006, Turkey will decide whether to join the production phase of the JSF programme or go for the Eurofighter.

Turkey has invested $175 million for the development phase of the JSF, but procurement officials are cited as being "unnerved by increasing uncertainties over the eventual cost of the programme." Ankara is also complaining of too little work share for Turkey's local industry under the programme. And, across the border, Greece also is in the throes of selecting a new aircraft after a five-year defence review and delays due to financial problems. Eurofighter is one option here.

Gradually, therefore, we are seeing the war between rival aircraft-makers hotting up, along strictly transatlantic lines, with the Eurofighter and Rafale being pitched against the F-35 as battle lines are drawn.

Britain, as always, is piggy-in-the-middle. But the situation that we have long forecast is coming to a head, with the British government having to decide on which side of the pond its interests lie. So far, Drayson is making pro-US noises in public but, behind the scenes, other forces are at work. All too soon, there is going to be blood on the floor.