The Law Lords do the right thing 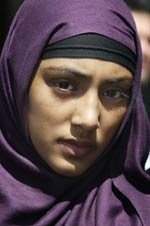 In an important decision, the Law Lords, led by Lord Bingham, have upheld the right of Denbigh High School in Luton to devise its own uniform – in this case a version of the shalwar kameez – and to exclude anyone who refuses to adhere to it.

The case of Shabina Begum (who is usually flanked by her brother and cousin, both members of the Hizb ut-Tahrir, an organization that openly supports Al-Qaeda and one that has been banned in a number of countries, though not, naturally, in Britain) has been going on for some time but has, now, reached the end. Unless, of course, she and her brother and cousin do go to the ECHR.

Ms Begum’s argument, conveyed by her counsel, Cherie Booth QC, was that the shalwar kameez was not modest enough for her and she had to have the right to wear a full hiljab, an outfit that is completely unsuitable to a school.

Denbigh High School pointed out that the shalwar kameez is worn across the Indian sub-continent (whence Ms Begum’s family originates) and was considered to be perfectly suitable by the many Muslims who attend the school, teach in it and sit on its parent teacher association and the governing body.

There was some debate as to why Ms Begum thought that a shalwar kameez was unsuitable. The school’s lawyers quoted her as opining that it was worn by “unbelieving women” and, therefore, she could not sully herself with it. I expect the hiljab is worn by unbelieving women, too, on occasion, particularly when they have to hide cuts and bruises inflicted on them by their loving families.

Ms Booth QC insisted that the lawyers were not accurate. Apparently Ms Begum did not consider the shalwar kameez suitable for a pubescent and post-pubescent girls. Which opinion, M’lud, is obvious nonsense, as many women of varying ages wear it.

At this point, rather uncharacteristically, I should like to ward off the personal attacks on Ms Booth. She is a barrister and, therefore, takes cases as they come up. I have no idea whether Matrix Chambers has a cab rank system or whether she took this one because it was likely to be high-profile. But if we start saying that barristers must not take on certain cases because they are clearly wrong we undermine the basic notion of both the English and the Scottish legal systems, that everyone has the right to defence.

It is, of course, true that Ms Booth set up the Matrix Chambers, to specialize in Human Rights cases immediately after that particularly contentious piece of legislation had been pushed through Parliament by her husband, the Prime Minister.

While this may not qualify as sleaze, many of us held our noses as we read about it.

Another question is who paid for the Ms Begum and her family through the various appeals (the one to the Law Lords was brought by the school). Not, I trust, the taxpayer.

Having defended, however lukewarmly, Ms Booth QC, I must add that it would be ever so nice to see her in court defending a girl who had managed to escape her family’s imprisonment, having refused to go along with a forced marriage. What price human rights in those cases?