Well we are still here 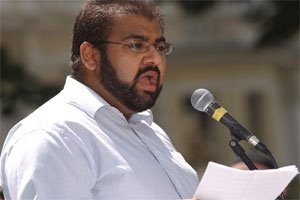 What is more to the point, our posting on the Shabina Begum case is still up and our “friend” Dr Imran Waheed has not responded to our second posting. We are waiting to hear from him and his organization and, in the meantime, my colleague and I remain careful about any parcel we might receive unexpectedly.

As we expected, we have had a great deal of support from our readers and readers of other blogs, like the Daily Ablution. Anything else would have surprised both of us.

I regret to report that there is some uncertainty about Free-Market News Network, which republished the piece, then received an e-mail from Dr Waheed and promptly removed the posting. Unimpressive, to put it mildly, but I believe the problem may sort itself out.

In the meantime, I am glad to say that we have had a great deal of information about Hizb ut-Tahrir and its various involvements in events far and wide.

The history of the organization is detailed well with many references in this FrontPage article by Dr Rachel Ehrenfeld and Alyssa A. Lappen. The article traces the development of the organization and its banning by numerous Middle Eastern governments as well as Russia and, more to the point, Sweden and Germany. The authors argue for its ban in the United States and that may yet happen, though it is more widely spread in Europe.

Indirectly we have found more information about Hizb ut-Tahrir on GlobalSecurity.org.

We have also had some excellent advice from all our readers and we are thinking of printing out all those web pages, though getting them signed by solicitors or commissioners of oath might cost money. (I have never discussed anything except the purchase of my house with my solicitor or temporary problems with neighbours over trees. He would be somewhat surprised to be asked for advice on matters of this kind.)

Then there are all the links we have received to strengthen our case. There is the Swedish blog Jihad I Malmö, which tells us that Hizb ut-Tahrir is to be prosecuted again in Denmark for disseminating leaflets that threaten Jews and Danish politicians (and, above all, one must assume, Danish politicians who happen to be Jewish). The blog is in Swedish but can be deciphered. Anyway, the information is there.

On the Ummah Forum we can see a press release (scroll down to the third piece) put out by Hizb ut-Tahrir about the Shabina Begum, which would indicate a certain connection there. And, of course, there was that interview in the Guardian with Ms Begum conducted by their own little jihadist, Dilpazier Aslam, who later left the newspaper rather than sever his links with HT (as that organization is affectionately known).

The Guardian’s interesting role in the whole saga is detailed by Scott Burgess on the Daily Ablution blog.

One of our readers sent us a link to a Muslim website dedicated to exposing HT as a wrong-headed organization that misleads the youth of Islam. It is not, indeed, an easy read and, probably, would not be much use in a court of law, should it ever come to that, which we hope it will not, but extremely interesting.

Finally, there is the link to the career of Cherie Booth QC in Wikipedia, that refers to the case and the controversy it has caused because of the Hizb ut-Tahrir involvement. And that takes us back to the Times article we linked to in our previous posting.

We think there is enough there, together with Hizb ut-Tahrir’s own website to prove our case, should it come to that. And we do not like people who try to bully us.