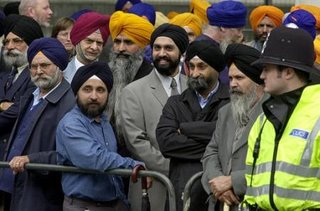 Six European Union member states, Britain, France, Germany, Italy, Spain and Poland have met at the German Baltic resort of Heiligendamm to come up with some solution to the problems of mass immigration and assimilation. Why Poland was involved is a mystery. It is hardly a great magnet for immigrants except from countries to the east of it and those people share Polish values by and large.

On the agenda was a French proposal

“… that prospective immigrants should learn the local language, be familiar with their new host country's institutions and have the financial means to support themselves.”

France, of course, had a few problems last year with its immigrant communities but I wouldn’t say those were rooted in a misunderstanding of the host country’s culture. Actually, they understood it all too well, as similar scenes, perpetrated by the more affluent students from the Sorbonne in the last couple of days, have shown.

Then there is the problem of learning the local language. Is there any need for that to become compulsory? After all, if people do not want to learn the language, well, so be it.

The problem is surely the billions of taxpayers’ money spent on providing official information in many different languages and not insisting that English be the first language in schools and other official institutions. Take all that away, reform the tax and welfare system so it encourages people to get jobs and the incentive to learn the language will be there.

Of course, none of it will happen but then neither will the compulsory testing of language. And if the latter is introduced there will be many ways of getting round the problem.

Several countries, Britain included, are introducing tests on the host country’s culture for those applying for citizenship or, even, asylum. All fine and dandy but how do you define culture?

The British test, I believe, includes questions about soap operas and one about the Queen spending her holiday in one of her castles. I would certainly fail all those. But ask me anything about Queen Elizabeth and her pesky sea-dogs and there will be no stopping me. As for the Sherlock Holmes canon – well, don’t start me on it.

Other countries, like the Netherlands, and some German länder are trying to gauge the immigrants’ and potential new citizens’ reaction to various rather thorny subjects, like homosexuality and women’s freedom. So far there have been an outcry from some of the left-wing parties and threats to go to the European Court of Human Rights by the Muslim organizations. Who says they do not understand our culture?

I find it a little surprising that there is no talk of punishing people who break the law of the country they live in. Surely, the answer is not to make immigrants sign integration contracts that enumerate

“[t]he values of our societies - democracy, respect for other faiths, free speech, the rule of law, free media and so on - are values we would expect everybody wanting to settle in these countries to respect.”,

but which cannot be enforced. Instead, let us make it clear that people are free within the bounds of the law. And that, as we now know, includes schools deciding on their own uniform. It also includes an acknowledgement that honour killing is murder and is to be punished as such. It includes a ban on incitement to violence and a firm assertion that there is only one Parliament (well, give or take those Assemblies in Cardiff and Edinburgh).

In other words, the greatest and most important value that all immigrants must accept is the rule of law with freedom for all guaranteed within it. But then, the rule of law is not something the EU can fully comprehend itself. Nor is it entirely clear on the subject of democracy or, for that matter, freedom. The blind leading the blind.