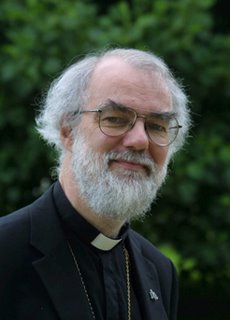 One gets so used to the great and the good sounding off about Guantánamo, as if there were no prisons or camps, and considerably worse ones at that, anywhere else in the world (try the rest of Cuba) that, at first, I paid no attention to the Archbishop of Canterbury, Dr Rowan Williams pontificating.

“Any message given, that any state can just over-ride some of the basic habeas corpus-type provisions, is going to be very welcome to tyrants elsewhere in the world, now and in the future.

What, in 10 years' time, are people going to be able to say about a system that tolerates this?”

Yes, yes, I thought. Repeating what Archbishopt Desmond Tutu has said (clearly not having read any of the recent reports about South African prisons) and the Archbishop of York. Then I noticed where Dr Williams was when he made this outburst. In Sudan.

Sudan? And he is blathering about Guantánamo? I wondered what he said about the situation in Darfur. Apparently very little, not wishing to upset his hosts, the Sudanese government.

According to the Daily Telegraph report

“Dr Williams was speaking in Khartoum during a World Food Programme tour of Sudan, the first by an archbishop since last year's peace agreement between the mainly Christian south of the country and the Islamic government.”

The south has been more or less pacified, so the Sudanese government is shepherding all foreign visitors and journalists there. Darfur, on the other hand, is off the map as far as they are concerned and, it seems, the Archbishop of Canterbury accepted this state of affairs.

“The Archbishop was worried about the fate of Camp X-ray's 500 prisoners. He said nothing about the two million refugees who have been driven from their homes in Darfur.

They are prisoners, just like Guantanamo's inmates, trapped in squalid camps and unable to leave for fear of the brutal militias who have turned Darfur into a killing ground.

These armed gangs were, incidentally, raised and deployed by the regime that hosted Dr Williams.

Including those who succumbed to starvation and disease, the number of dead in Darfur may now be as high as 300,000 - five per cent of the population.”

How different, one might note, from the behaviour of his predecessor, Archbishop Carey.

“His predecessor Lord Carey's first trip to the Sudan in 1994 led to the expulsion of the British ambassador when the then archbishop refused to visit the north of the country on the government's terms, instead flying into the south from Uganda.”

But then Archbishop Williams is not known for stepping out of line as far as the left-of-centre consensus goes. In the recent Synod decision to push for disinvestment in Israel (not any other country), the Archbishop voted in favour. In the subsequent brouhaha he tried to explain it all away to the Chief Rabbi. Former Archbishop Carey said, quite simply, that the vote made his feel ashamed of being an Anglican. There, I fear, one can see the difference between posturing and genuine goodness.

Darfur is, of course, one of the great failures of the transnational organizations. Untold, uncounted and unaccountable millions have poured into the country from the UN, from the EU and many other organizations, supposedly to help the people of Darfur in their plight.

There have been no explanations where the money has gone and the destruction of the civilian population by the janweed militias, armed, trained and protected by the Sudanese government (Archbishop Williams’s hosts) has gone unabated.

Peace was supposed to have been imposed by the African Union forces stationed in the area but, even as a joke, that sounds feeble. Recently the Sudanese government has insisted that it did not want UN troops in Darfur, apparently seeing this as another example of western interference with Muslim rights. As it happens, the vicitms in Darfur, unlike southern Sudan, are also Muslim but they happen to be black, not Arab.

Curiously enough, neither Sudan nor Darfur were mentioned in an article signed by several Nobel Peace Prize winners, published in the International Herald Tribune. The signatories were Jimmy Carter, Oscar Arias, Kim Dae-Jung, Shirin Ebadi and Desmond Tutu. They have obviously decided to take their struggle against the United States, its ambassador John Bolton and the whole notion of accountability public.

The title of the article was “Human rights: Principles defeat politics at the UN”. This is clearly nonsensical. If principles defeated politics, the UN would cease to exist and Jimmy Carter would have no occasion to keep travelling round the world, making ridiculous comments.

The piece is promoting the compromise proposal put forward by the President of the UN General Assembly, Jan Eliasson for the new Human Rights Commission. It will not be a weak compromise, assert the signatories (as they cannot possibly be the authors).

“The new council creates new expectations that members will uphold the highest standards in the promotion and protection of human rights, fully cooperate with the council, and undergo additional scrutiny through a peer review. Most significantly, a member that commits gross and systematic violations of human rights can be suspended from the body.”

Well it can. It always could. But will the process of suspending an errant member go through in the teeth of opposition from other members? Will this new Council, in short, prevent the scandal of Sudan’s presence on it? Seems unlikely. Oh, and by the way, shouldn’t Archbishop Tutu making comments about Darfur?