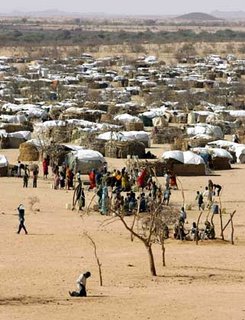 Never again, we keep saying. Never again Srebrenice, never again Rwanda, we repeat as another film is about to open about the latter massacre (“Shooting Dogs”). We have stopped saying never again about DR Congo. Well, what about Darfur? In fact, what about Sudan, in general, as the eastern region is about to go the way of the south (temporarily pacified as the Archbishop of Canterbury’s visit proved) and the west (Darfur)?

Well it seems the never again is happening and will go on happening. In ten years’ time there will be films about Darfur. What part will the UN, the EU's Human Rights Commissar or the Archbishop of Canterbury play?

In the meantime the African Union has decided to extend its stay in what the ISN Security Watch describes quaintly as “Sudan’s troubled Darfur region”. Troubled is one way of putting it.

The Sudan government, that has been arming and training the murderous janweed militias (though, as we know, the Archbishop managed not to notice anything untoward) has laid down a condition for the AU’s handing over to UN forces, and that is the surrender of the rebels beforehand. While this may not sound unreasonable, the government’s definition of rebels tends to be somewhat broad and seems to include tens of thousands of women and children.

ISN estimates that around 180,000 people have died from violence, disease and starvation. Other estimates put the casualty rate as high as 300,000. Around 2 million people have been displaced. Most of them are in terrible refugee camps that provide minimal safety if that.

The UN refugee agency is now cutting its budget on the grounds that the security situation has made it impossible for them to carry their work out adequately. That’s one way of putting it. (That phrase seems to crop up all the time.) In fact, they have not been able to provide security at all.

In the meantime, one would like to know what happened to the many millions of euros, the EU’s ECHO has handed over to Sudan. Has anybody outside the government and their friends and relations benefited from the money?