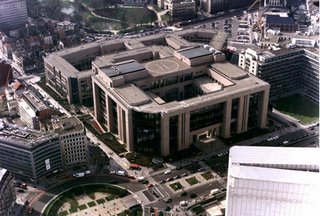 For some reason, I got the impression that the Spring European Council, traditionally reserved for economic matters, was set for last week. In fact, it starts this Thursday, one day after Gordon Brown delivers his budget to the nation.

Anyhow, despite Schuessel's desperate hopes that something constructive is going to emerge from the "summit" and that any rancour is avoided, the Financial Times is telling us that Britain, Italy and the Netherlands are preparing a wrecking action which should set the whole scene ablaze.

This is to be a joint denunciation of protectionism in the European Union, drafted by the excitable Giulio Tremonti - Italy's finance minister, couched so as to criticise "economic nationalism". The trio then plan to assemble a coalition of "liberal-minded colleagues" to add their signatures to the document prior to the Council, thus ensyring a right royal dust-up with France, Spain and Poland in the hot seat.

The FT suggests that there is a strong element of national politics in this – ironic when it is denouncing "economic nationalism". It appears that Berlusconi intends to use the issue to try to revive its flagging campaign ahead of next month’s general election.

At least, this time, Italy – and its fellow travellers – will be on-side with José Manuel Barroso, who is also telling member state leaders to drop their “absurd” talk of economic nationalism, declaring that, "by definition we cannot accept nationalisms. We cannot build barriers against each other in a single market – that would be absurd."

Charlie McCreevy, the internal market commissioner, is adding to fray, having told French bankers in Paris it was useless building "political Maginot lines" around a national economy – a direct dig at the embattled Chirac and his less than merry men.

Schuessel, meanwhile, is still bleating about a new energy strategy for Europe, as well as wanting member states to commit themselves to "concrete" commitments to boost the economy. He has a better chance of swimming the Channel in concrete boots.