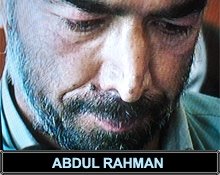 The BBC has finally decided to report on the Abdul Rahman case. In fact, the news is good. The man is set to be released, as one official, speaking on conditions of anonymity explained:

“The court dismissed today the case against Abdul Rahman for a lack of information and a lot of legal gaps in the case.”

While the prosecutor looks at the evidence again, he need not be in prison, particularly not in the maximum security Policharki Prison, which holds hundreds of Taliban and Al-Quaeda jihadists and terrorists.

President Hamid Karzai has been under some pressure over the case from the American, Canadian, Australian, German and Italian governments. The Pope, too, has made a plea for clemency.

Sadly, there has been nothing from our own Foreign Secretary as Charles Moore pointed out in the Daily Telegraph yesterday, nothing from the Prime Minister, who is, after all, married to a leading human rights lawyer.

While Rahman’s life remains in danger from clerics and some of his more excitable compatriots, one newspaper in Afghanistan has called for his release, arguing that the country cannot live in isolation. It needs western support and, in return, must show that it is prepared to abide by more open rules.

Meanwhile, in a completely separate development, the Iraqi embassy in Toronto has expressed its opinion of the bothersome and ungrateful Christian Peacemaker Teams hostages.

“Iraq's embassy to Canada lashed out at the Christian Peacemaker Teams Friday, calling them "phoney pacifists" and "dupes" after the antiwar group responded to the rescue of three of its kidnapped activists by condemning the U.S.-led military intervention in Iraq.

The Iraqi embassy called CPT "willfully ignorant" and "outrageous," and accused the Chicago-based group of being on the side of anti-democratic forces in Iraq.

"The Christian Peacemaker Teams practises the kind of politics that automatically nominate them as dupes for jihadism and fascism," the embassy's statement said.”

Couldn’t have put it better myself. The words "useful idiots" spring to mind.