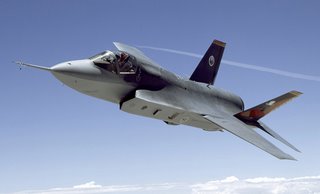 At last, the Joint Strike Fighter "row" has been promoted to the main pages of several newspapers. Moreover, Google offers over ninety stories on the latest developments of the saga we reported yesterday and in more detail on Sunday.

Without the background, however, the reportage is pretty one-dimensional, coming over as a "biff-bam" row between the UK and the United States, The Times leading the fray with the headline: "Britain in clash over US fighter secrets".

This leads a report written by Tom Baldwin in Washington who tells us that Britain – in the person of Lord Drayson - yesterday "threatened to scrap a planned £10 billion purchase of the new Joint Strike Fighter if the United States refuses it access to American military secrets."

Nevertheless, media reports give a confusing account, conveying the impression that this particular message was delivered to "members of Congress" – i.e., the Senate Armed Services Committee – but careful reading of several reports – especially that in the Telegraph indicates that Drayson also spoke to reporters "before the showdown with Senators", when he told them, "We should be absolutely clear about what our bottom line is on this matter ... we will not be able to purchase the aircraft."

In his statements to reporters, we are told Drayson was reluctant to discuss what he called "plan B" but, says The Times, "it is understood that the government is considering alternatives…" which "include prolonging the life of RAF Harriers or buying French Rafale aircraft."

However, The Times does report that Drayson told the Senators, "We are approaching important decisions that will impact on both UK and US military capability for a generation." He said that the US needed to understand that a mutual commitment to the JSF was dependant on Britain having "the operational sovereignty that we require".

The Financial Times adds to this, stating that Drayson did tell the Senate committee that, "Without the technology transfer to give us the confidence to deliver an aircraft fit to fight on our terms, we will not be able to buy these aircraft … I am spelling this out because it is so important to make our intentions clear. I know the British can be accused of understatement."

All this notwithstanding, this is, of course, the latest development in the vexed question of giving Britain access to the source codes, an issue that has been almost completely ignored by the media to date.

Yet it was rehearsed on this blog on 29 June 2004, almost two years ago, and even reported by The Financial Times in January 2005.

That rather makes a mockery of The Times report that "Drayson's comments …represent a significant escalation in a diplomatic row that has rumbled on, largely in private, for several months." That's the MSM for you – on the ball as always.

Throughout all the reports – with even the BBC website offering its own account, under the predictable headline, "US and UK clash over fighter jet" – what you do not see is any discussion of why the Americans are so reluctant to release technology to the British.

They may be right in so doing, and we believe they are, as we have discussed many times, for instance here and here, or they may be wrong. There may even be a case to argue that the US has handled the affair clumsily, especially over the unilateral proposal to cancel the second engine – which was the main reason Drayson was in Washington.

But, to the newspaper reader, nothing is offered by way of a view or background information that would enable the broader issues to be understood, which have massive implications for Anglo-US relations. This is the MSM at its worst.

But this also represents a massive failure by the Conservative Party, led on this issue by shadow defence procurement minister, Gerald Howarth. He has clearly infected shadow defence secretary, Liam Fox, with his view that the US – for reasons unspecified - are driving the British into the arms for the French, by their refusal to hand over their secrets, without in any way acknowledging that US fears of technology leakage may be well founded. Thus, The Times tells us that Drayson was "strongly backed by Liam Fox" who yesterday made his own submission to the committee.

In due course, as we have consistently predicted, we expect the UK to pull out of the JSF programme and buy the Rafale for its new carriers - a decision, we believe, has already been made. On present form, the Conservatives will then wring their hands and blame the Americans for their "clumsiness". Thus will the central issue of our drift towards European defence integration go unremarked, through want of political engagement.

But, since the process was actually kicked off by the Conservatives in the first place, we can hardly be surprised. They are hopelessly compromised on this issue and would not be keen to have their role dissected. And, as long as the MSM is happy with a diet of "biff-bam" stories, they will get away with it.