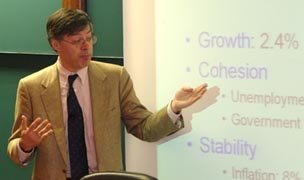 This chronicles the publication of a report by two leading economists, Jean Pisani-Ferry and André Sapir, the latter having produced the eponymous Sapir Report in 2003, which delivered a savage attack on the Lisbon process.

This time, teamed up with Jean Pisani-Ferry - Director of Brussels-based Bruegel think-tank – he has done it again. The short-form report, with the title "Last exit to Lisbon", runs to eight pages, but the message is unmistakable – and damning. This is what the pair say:

There were two problems with Lisbon 1: ineffective coordination and lack of political ownership. Lisbon 2 could have attempted to remedy the two dimensions of the problem, seeking to improve both the effectiveness of coiordination and the degree of political ownership as suggested in the Kok report. Instead, it chose to focus on the ownership problem. If implementation of the Lisbon strategy actually requires both problems to be addressed, then the new approach was always unlikely to succeed where Lisbon 1 failed. In the event, Lisbon 2 does not even seem to have succeeded in the goal of increasing political ownership by national authorities.

As good Europhiles, they nevertheless make a pitch for continuing the process, declaring:

These serious shortcomings might call into question the whole Lisbon process. However, we strongly believe that Lisbon remains crucial for the future of Europe. The Lisbon goals continue to reflect the major challenges that European economies are confronted with in this age of accelerated globalisation and technological change. What is more, these goals and the recognition of interdependence that they embody still command wide consensus.

But then comes the dagger to the heart:

Unfortunately, we do not consider that Lisbon 2 is on track to succeed. On the contrary, our assessment is that it will fail unless its current shortcomings are addressed as a matter of urgency.

Unwittingly, they then identify the reason why this is not going to happen: "The very nature of the Lisbon process," they say, "implies EU involvement in policy domains that primarily belong to the responsibility of member states."

There you have it. Under the current – or any – there is no way member states are going to surrender any more policy domains to the EU – as indeed we have saw yesterday with the proposal for an EU energy policy.

And all this, according to the FT, has been presented as a wake-up call to finance ministers by the Austrian EU presidency, Wolfgang Schüssel, ready for the Economic Council later this week. He need not have bothered.