And he's got it wrong 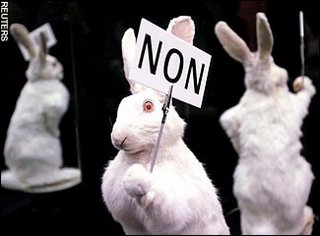 "So, you thought the European constitution was dead, did you?” That is the heading of the op-ed in today's Daily Telegraph by Daniel Hannan, Conservative MEP and darling of the Eurosceptic movement.

"Two years from now," he writes, "the European constitution will be in force - certainly de facto and probably de jure, too. Never mind that 15 million Frenchmen and five million swag-bellied Hollanders voted against it. The Eurocrats have worked out a deft way of getting around them."

We then get another thousand words on Hannan’s considered view, a view that is hopelessly superficial and wrong.

In his writing, Hannan argues that the process of integration is carrying on uninterrupted, seeing the EU in the one-dimensional way that so may people do – those who understand a little of it but who have never bothered to get to grips with its subtleties and complexities – or its history.

Thus he writes in his ignorance that the EU was "born out of a reaction against the Second World War, and the plebiscitary democracy that had preceded it", thus claiming that “the EU is based on the notion that "populism" (or "democracy", as you and I call it) is a dangerous thing."

In so doing, he ignores the fact that the concept was born in the aftermath not of the Second, but the First World War and was a reaction to the failures of the League of Nations and its rule by unanimity, which prevented any robust action on contentious issues.

In the 1920s, therefore, Monnet and Salter both sought a construction that would by-pass the unanimity rule, introducing the concept of "qualified majority voting". This would not only enable decisions to be made, but would safeguard the rights of the smaller nations as the weighting in the "qualified" structure would prevent the big nations ganging up on the "dwarfs" and imposing their demands on them.

Thus was born the core philosophy of the "Monnet method", which sought to replace the evil – as Monnet thought – of intergovernmentalism with the more benign doctrine of supranationalism.

Where Hannan gets his analysis wrong is that he fails to recognise that, although the "European Union" as an entity is powering ahead with issues which were introduced in the EU constitution, they are being implemented on an entirely different basis.

The aim of the constitution was to add to the commission's powers, collapsing the so-called "pillar" structure and bringing much of the intergovernmental nature of pillars two and three (Foreign and Security Policy & Justice and Home Affairs) into the maw of the supranational acquis.

But, with the rejection of the constitution by the Dutch and the French, the "pillars" stand intact. While policies named in the constitution are being added to the Union’s brief, the power is not going to the commission, but the European Council, with the council of ministers increasingly acting as subordinate structures to the Council.

In other words, there has been a fundamental shift in the nature of the EU, with member state governments re-asserting their authority, giving the Council more power. On the other hand, the political power and the authority of the commission is ebbing away. What we are seeing, therefore, is the antithesis of Monnet's supranational integration and a reversion to intergovernmentalism.

This has profound implications. Not least, although the supranational model has massive structural imperfections, in its way it has a systematic element to it. Its proposals are published and their is a structure to their approval, not least through public discussions in the European Parliament. Thus, while we can rarely prevent new measures coming through, at least we know of them and know they are coming.

Not so with the Council route. The Council, of all the EU institutions, is least transparent. There are no structures for its decision-making and there are neither EU nor national mechanisms for scrutiny of its actions. Much of what goes on in Council is neither recorded, witnessed nor understood, letting member states stitch up deals between them, with minimal interference or democratic input.

The upside is that, in it is own way, this structure bears within it the seeds of its own destruction. As Monnet observed, the rule of unanimity does not work on the serious decisions, when national priorities reassert themselves. Already, we have seen this with the Lisbon process - and much else besides - so that little constructive can be expected from the new intergovernmentalism. More likely, the friction engendered by high expectations combined with the inability to deliver, will hasten the demise of the Union.

Not that this needs to trouble the likes of Hannan and his cohort of worshipers. He can continue with his highly-paid drivel and be adored by the many, while the tide of history will find its own level without his help or understanding.