A certain lack of resolve 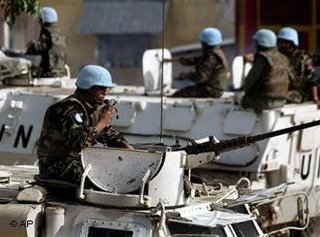 "The EU is becoming a global power; a force for good in the world," says Javier Solana. And, inflated by that sense of self-importance, his subordinate, Nick Whitney, Chief Executive of the European Defence Agency, happily burbles about the need to "improve the EU's military capabilities".

What capabilities? When it comes to supplying the piffling number of 1,500 troops to augment the badly over-stretched (and largely incompetent) 17,000 United Nations troops in the Democratic Republic of Congo (pictured), member states are all in a tizz-woz.

The EU has been asked for help by the UN to deal with the forthcoming elections on 18 June and, as Deutsche Welle records, ministers of the EU member states in Innsbruck, Austria, yesterday, "hesitated to pledge troops", instead calling for more details on what the mission will entail.

At the forefront of the undeciders is German defence minister Franz-Josef Jung, revealing that Germany had been considered to lead the force – if it can be called that. He adds that, if Berlin does take the lead, chances are the mission will be small. "Germany cannot commit to sending 1,500 soldiers," he says, and neither is he prepared to see those few who could be sent staying longer than four months.

Berlin insists that even with French support, the plans are too ambitious, Jung declaring that "this cannot be only German and French troops… We cannot take over a leading role alone." Thus, Poland, Sweden, Austria and Spain are also being asked to offer troops, for a force that may eventually be pared down to 1,2000.

This is to police the aftermath of a war that has killed some 4 million people since 1998 and left 1.6 million others homeless. But, to make sure that the precious German troops are not put in harms way, Solana has pledged that the EU "force" would be based close to but not inside the conflict-ridden country. "We are talking about 1,000 (troops) over the horizon in case of need… close enough so that it doesn't take three months to deploy," he says. So much for "global power".

This lack of resolve, however, has not stopped ministers coming up with grandiose plans to increase research and technology spending of defence, but even then they failed to agree on how much, and how the money will be controlled.

Yet, to judge from the lack of enthusiasm for the Congo mission, I don’t know why they bothering. Clearly, when the chips are down, they have no intention of actually deploying troops for anything useful or dangerous, so they might as well save their money.