Why do we bother? 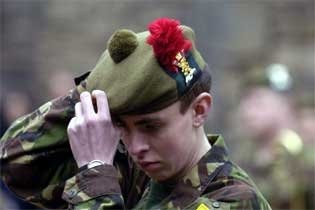 Not only did this week mark the retirement of the Royal Navy's last Harrier fighters, leaving the fleet without organic air cover until at least 2017, it was also the week in which in which six Scottish regiments disappeared "for ever", to be replaced by the "super" Scottish Regiment.

The demise of the Scottish regiments has been the subject of much press over term, and is currently being discussed in the letter column of The Daily Telegraph, most notably today, under the heading "Politicians knife Scottish regiments".

This follows on from a piece written by military historian John Keegan a couple of days ago but what is missing from this piece and only barely mentioned in the letters today is the correct reason why the regiments are being reorganised.

Keegan cites General Sir Michael Jackson, the Chief of the Defence Staff, who he says argues that the changes will improve the career patterns of soldiers by reducing postings between stations and so stabilising family life – but that is one outcome, not the reason.

Touched on in only one letter is a reference to "ministerial assurances on 21st-century mobility", and it is here that we need to look for the rationale for the changes. The Infantry is being be structured to provide the nucleus of the proposed medium-weight, net-centric armoured forces. These will form the core of the expeditionary capability of that will enable the UK to fulfil its commitments within the European Rapid Reaction Force. In other words, the current reorganisation has a very strong "European" component and is intimately associated with European defence integration.

The trouble is that we have made this point before, here and here, and have also remarked on the inability of the media to address this these issues, for instance here and here.

There are only so many time we can keep banging on, repeating the same message. But the information is there for anyone who wants to look at it, and our commitments to the ERRF are in the public domain. That the media, and especially the Conservative opposition and the Eurosceptic community – plus all the campaigners, have failed to engage with this issue represents one of the most egregious failures of contemporary politics.

Not for the first time, therefore, when those few who even take an interest in this issue seem content to winge about cap badge and the "loss of British traditions", without engaging with the real issues, we wonder why we bother even trying to point out what is really happening.