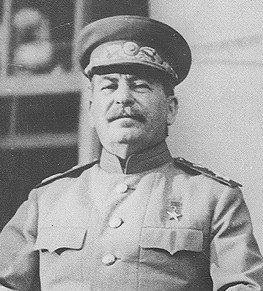 My colleague has written about the real anniversary to be celebrated today: the first flight of the Spitfire. But there is another important event associated with March 5 – the death of Joseph Stalin. Well, to be quite accurate, this is when his death was announced and we cannot be quite sure when he actually died. It would appear that he had a stroke a day or so before his death but none of his hastily summoned cohorts dared to call a doctor. Then again, neither were they too keen on letting him live.

Today is the fifty-third anniversary of that momentous event. As we believe in a certain amount of recycling on this blog, I have decided to post the article I wrote for the Salisbury Review in 2003 for the fiftieth anniversary:

“Fear and fascination fifty years on

Fear is the overwhelming theme of Russian history. People fear the rulers and the rulers constantly fear the people. There is other fear: that experienced by members of the ruling caste both of those above and those below; that experienced by the educated elite, that used to be known as the intelligentsia of the dark people, the incomprehensible peasantry, the masses.

Fifty years ago this month all those strands coalesced. On March 5 1953 died Joseph Vissarionovich Stalin, the dreaded master of Russia and the other republics, of satellite colonies and of foreign communist parties. A man so feared and yet so adored that his name was pronounced only with awe. Otherwise, people whispered nicknames and avoided any mention. A man, whose closest colleagues sweated (and worse) with fear every time he summoned them. A man, who, with all that, was so afraid of the people that he rejected the very idea of a home guard in Moscow as the German army rolled forward in the autumn and winter of 1941, certain that the guns would be turned on him and his immediate entourage.

His death provoked relief but also fear. There were worried mutterings about what might happen next. The authorities were so afraid that on the day of the funeral side streets were blocked off with armoured cars. A sudden wave of panic drove many of the huge crowd to the barriers and hundreds, maybe thousands, were crushed to death. As he ruled, so he died: surrounded by a sea of blood.

In the free and wealthy West his death was mourned far more. Liberals and left-wing politicians, writers, journalists, academics, even the occasional trade union activist saw Stalin’s Soviet Union as the shining beacon, the great hope of mankind. To do this, they resorted to greater and more extensive lying than any supporter of the Nazi regime had done. For decades the existence of labour camps and torture chambers, the death of millions of people and destruction of whole sections of the population was denied.

Each small and carefully controlled revelation from the Soviet Union was greeted with shock and surprise. Those who wrote openly about the Soviet reality were vilified as cold warriors, reactionaries, fascists. Only slowly has the truth about Communism been accepted. And really, has it? Yes, people sort of know that it was a nasty regime but there are few discussions and any mention of Communist labour camps is dismissed as being tiresome and unimportant. It is all finished. Let us not talk about it.

But alas, we need to talk about it. The man who died fifty years ago and his influence has distorted European and world politics to a far greater degree than his equally vicious colleague and enemy, Hitler, did. Yet Hitler’s deeds and misdeeds are analyzed repeatedly and, more importantly, castigated. Any apologist for Nazism is denounced immediately and rightly; more, anyone who doubts the accepted version of the Holocaust is equally denounced. Apologists for Stalin, deniers of the Communist mass murder are still highly regarded and it is their opponents that are vilified. Fifty years after the death of the Great Leader and one of the world’s greatest criminals it is time for the West to start thinking seriously about his deeds and their consequences.”

Another man who died on the same day was the composer Prokofiev. And forty years ago, on March 5, 1966, the great Russian poet Anna Akhmatova, who had created one of the great monuments to the victims of the Terror in her sequence of poems, Requiem, died. 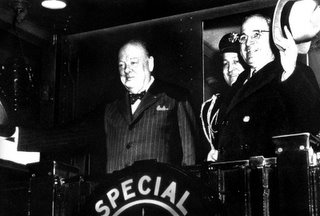 One more anniversary, also to do with that evil system: on March 5, 1946, exactly 60 years ago Winston Churchill, then Leader of the Opposition, gave a speech in Westminster College, Fulton, Missouri. The speech was carefully listened to by President Truman.

He warned against Soviet expansionism and the various Communist fifth columns that were operating in western and southern Europe. He reminded his listeners of the perils of appeasement and, although, not all East European countries had become actual Soviet colonies, he presciently and memorably pronounced:

“From Stettin in the Baltic to Trieste in the Adriatic, an iron curtain has descended across the continent.”

The iron curtain has gone but we have not yet recovered from its effects.