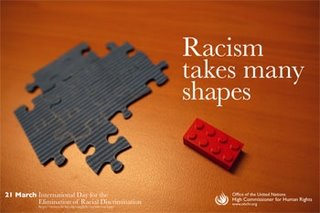 Today is not just the first day of spring (something of a joke in these latitudes this year) and, incidentally, the anniversary of the Hungarian Soviet Republic of 1919 (lasted 133 days), it is also the International Day for the Elimination of Racial Discrimination. And what a success that has been.

The reason this day has been picked is because

“Forty-six years have passed since the Sharpeville massacre, where 69 demonstrators were shot and killed during a non-violent protest against apartheid on 21 March.”

Fair enough but, alas, we have had many more massacres, some based on race, some on tribe, some on religion and many in Africa since then. Rwanda anyone? Darfur? Eritrea? Southern Sudan? Nigeria? I could go on.

But have a look at the poster the UN has chosen for this year. What do they present as a symbol of racial discrimination? That’s right, a piece of Lego. And who produces Lego, one of the greatest inventions as far as toys go? Well, well, well, if it is not Denmark, the country that is insisting on her right to have a free press.

Our taxes are keeping that noisome organization, the UN, alive.